Those opposed to the various Occupy protests will be glad to hear the following news: the demonstration and encampment in Madrid’s Puerta del Sol is over. This imposing open space, the centre of Spain and location from where all distances out into the country are measured, has been returned to its customary status as a stop on the tourist tour, with a transport interchange beneath. 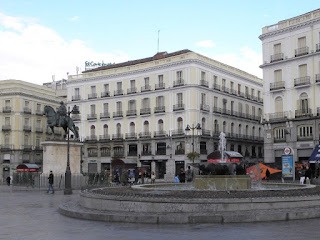 But that does not mean that all is now well in Madrid and across Spain. The number of unemployed – taken from this morning’s 20 Minutos free sheet, folks – is over 4.36 million, which is over 21% of the workforce. It is not difficult for the hacks to find those who have been trying to get into work not just for months, but for as much as three years.

And, with a General Election looming, it should come as no surprise to see that there will be more demonstrations in Puerta del Sol. This includes a countrywide “mobilisation” on November 13, despite the Board of Elections trying to ban it. It appears that a number of squares and open spaces are being targeted, because they are to be used for political rallies and party meetings.

So what are the major parties offering the electorate? Austerity, austerity and yet more austerity, although no doubt not necessarily in that order. Central Madrid may be as busy as ever, but the satellite and dormitory towns are showing signs of, well, being very, very quiet. Local shops, restaurants and other businesses are closing. Many suburbs are like ghost towns.

Some building continues – the kind of houses being built, though, may not be within the reach of any except the well off. In northern Madrid, the suburb of Pitis has been left partially built, with the development ending some hundreds of metres short of the railway and Metro interchange. The roads have been laid out, but nobody wants to build. And few want to buy what is built.

Everything costs more than it did two years ago – a single fare on the Metro has been hiked by 50%, although a 10-journey ticket is just 27% more. Eating out costs more. Wages stay the same. The protesters, when they reconvene, will be taking aim at the banks, as in the UK, but say that they will be politically non-partisan, and against an “unjust and unsustainable” economic model.

Winter is cold in Madrid. Maybe it will be the same across Spain.