Just when the thought enters that the assembled hackery labouring in the service of the legendarily foul mouthed Paul Dacre may have lost their appetite for ripping off other papers and twisting stories to ramp up the why-oh-why value, they come running with another example of cynical unpleasantness. Today’s restatement of the genre comes from Liverpool. 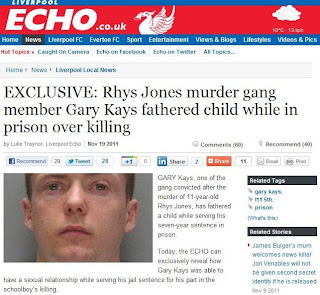 Yesterday, the city’s evening paper the Echo had an exclusive: Gary Kays, who helped Sean Mercer, the killer of 11-year old Rhys Jones, and was later convicted of aiding and abetting, had been given day release from prison, from where he has now been released after serving his sentence. While on release he fathered a child with his partner. He was then allowed release to attend the birth.

So far, so much for discussion: prisoners being let out on day release is controversial, and the activities of sometimes armed gangs in parts of Liverpool – and other cities in the UK – are not appreciated by many in the wider community who would rather they were not there. There are other issues to gang culture, too, such as the trade in currently illegal drugs. 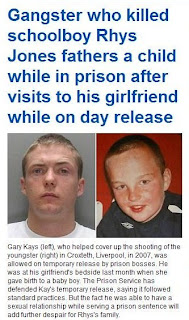 ... and the dishonest Mail rip-off

None of this, though, has taxed the Mail unduly, nor have the hacks been put off by the fact that Kays did not do the shooting, as witness the screaming headline starting “Gangster who killed schoolboy Rhys Jones ...”. The assertion is not accidental: the story itself starts “Rhys Jones killer ...”. And only in the third paragraph is the acknowledgement “it was reported in the Liverpool Echo”.

And ripping the story off from the Echo, together with a few stock photos, is all the Mail has done. The giveaway is in statements like “the fact that he was able to have a sexual relationship while serving a prison sentence will add further despair for Rhys’s family”, which is code for “we couldn’t be bothered asking the Jones family for a statement, or whether they approve of what we’re doing”.

What you will not see the Dacre hackery telling the Leveson enquiry.

[UPDATE 1850 hours: the Mail has now amended its article to remove the "killer" description, which is either a remarkable coincidence, or someone at the Dacre empire is on the lookout for criticism. Could be a long-term assignment (many thanks to Tabloid Watch for alerting me)]