Thus far, the number of editors and proprietors passing adverse comment on the Leveson enquiry have been noticeable only by the lack of noise they have made, but this could be about to change: tucked away in today’s Daily Star is a sign that Richard “Dirty” Desmond is not happy about it. Sadly for Des and his dwindling band of hacks, it’s a clumsy and crude – and therefore noticeable – one. 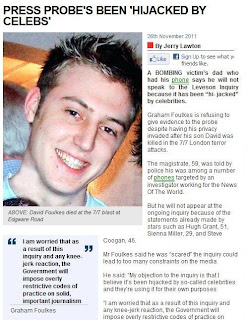 And the crude bit? The story was lifted from the previous day’s content on the Telegraph site. So that’s more cheap filler for the Desmond press. But neither paper gives its readers the background on Graham Foulkes, whose son was killed by the detonation of a bomb near Edgware Road station by one of the 7th July terrorists, and whose phone was subsequently hacked.

Foulkes, who had not been told of the hacking until Operation Weeting began to look rather more seriously at the evidence in their possession – from Glenn Mulcaire – responded by saying “the thought these guys may have been listening ... is horrendous”. In an interview with Gordon Burns for BBC North West, he described the hackers’ actions as “wicked beyond wicked”.

But this has not found its way into either Telegraph or Daily Star. What has been published by the latter, and emphasised by being quoted separately in suitably bold type, is Foulkes saying “I am worried that as a result of this inquiry and any knee-jerk reaction, the Government will impose overly restrictive codes of practice on solid, important journalism”.

The idea of the Desmond press even being in the vicinity of “solid, important journalism” is risible. But that is clearly what readers are meant to read and take on board, as opposed to the inconvenient fact that Foulkes’ refusal to appear before Leveson may have been undermined by his not having been asked in the first place.

Pretending that your journalism is “solid and important”, while peddling ungrammatical copy lifted from another paper’s website? That’ll be another Benchmark Of Excellence.