Both the Mail and Express are equally hostile to the EU. Both are also alert to any threat to house prices. So a story that coupled both the EU and a threat to house prices would be a perfect storm of frightening. But how to achieve it? Well, today, the Express has done just that, as its front cover thunders “EU Rules To Slash House Prices”. Except – no surprise here – it’s not true. 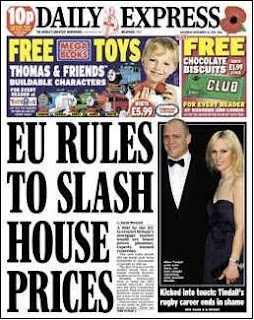 What the Express is alluding to is the proposed (as in only being discussed right now) Mortgage Credit Directive, which is to do with responsible lending, balanced and clear marketing of mortgage products, comparable and clear pre-contractual information, sound financial advice, good creditworthiness assessments, and supervision of brokers and other intermediaries.

However, eagle-eyed observers will have noted the date on the document: 31st March this year. So the proposal has been around for seven and a half months before the Express has hit the panic button. Why should this be? Ah well. Someone at the paper has discovered that buy-to-let mortgages could, maybe, no longer be based on projected rental income.

And it is this group that the Express is now championing unequivocally, telling that this would “force hundreds of thousands of people to sell up”, which, if they had already secured mortgages on their properties, it would not. So no crash in house prices would be caused, although new mortgages may prove more difficult to secure. But the proposal is still just that – a proposal.

Moreover, the Financial Services Authority (FSA) has, as would be expected, made its own submission, working with the Treasury. The FSA has put at the top of the list of changes it would like to see “the exclusion of ‘niche products’ from the scope of the directive ... such as buy-to-let lending”. And the news coming out of discussions on the proposal suggests that buy-to-let will indeed be exempted.

But none of this is disclosed by the Express to its dwindling band of readers. Instead, there is the usual frothing pundit from UKIP, and comments from the Building Societies’ Association and the Association of Residential Letting Agents which are suitably qualified and give the impression that both spokesmen were fed the story as the Express has published it.

Cheap and nasty knocking copy that demonises a favourite bogeyman, while in reality not being even partly true, and all just to frighten the readers into buying an equally cheap and nasty newspaper? That’ll be another Benchmark Of Excellence.