Express To Cheap And Scary

Nothing epitomises the cheap and nasty nature of the Desmond press better than today’s edition of the Daily Express: between them, both print and online editions demonstrate that proof reading and lead story fail any kind of quality control test. The online edition has for once been updated with news that has come too late for the front page, and the lack of sub-editing shows.

Such is the eagerness to once more kick the EU that the expression “toe the line” has come out as “tow the line”. The Express of Max Beaverbrook would never have let such a basic error pass sub-editing, but the paper under Richard “Dirty” Desmond sent those staff down the road as a measure not so much of cost-cutting as profit enhancement. The result is singularly unsatisfactory. 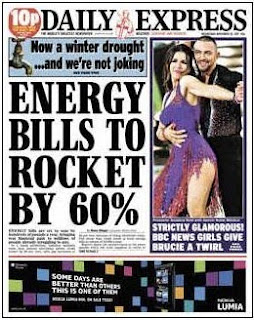 Also cheap and nasty is the main lead in the print edition: not for the first time, this is a scare story about energy bills. “Energy Bills To Rocket By 60%” thunders the front page banner. Given the use of the term “rocket”, the inference is clear: this is not a gradual increase of a few percentage points a year, but a sudden and violent hiking of prices. Isn’t it?

Well, no it isn’t: a look at the supporting small print reveals that one-third of those on a panel of “experts” advising SmartestEnergy (who supply energy generated by the independent sector) say that prices will rise 60% by 2021, in other words by around 5% per annum over the next decade, with 90% of that rise being down to increased wholesale energy costs.

There is also the increasingly tired “Experts blame the upward trend on the green agenda”, although the best the Express can manage is one pundit who tells of “the need for the major suppliers to invest in green technology”. This subject has been the source of significant misinformation of late, with climate change denialist lobby group the Global Warming Policy Foundation (GWPF) leading the way.

GWPF main man Benny Peiser (not a scientist, and with no peer-reviewed literature to his name) claimed that “green costs” added between 15 and 20 per cent to energy bills. The actual figure for environmental costs is 4% for gas and 10% for electricity, so if you’re using an equal amount of both, “green costs” add around 7% to your bill, and contribute none of the wholesale price increase.

None of which you’ll find in the Express. Today’s front page story is yet another feeble attempt to frighten the supposed target audience into buying Des’ cheap and nasty rag. But thus far it makes a profit, so that’s another Benchmark Of Excellence.