Just when I thought the standard of hackery at the Daily Express could sink no further, along has come Martyn Brown to prove me wrong. It’s all here: the lifting of copy from previous editions of another paper, dodgy figures, “fresh outrage erupting”, and grammar so inept, it would shame GCSE students. The piece is titled “Fury At Chris Huhne’s £1Billion Climate Aid Deal”.

The source for this particular act of invention is, once again, the Maily Telegraph, itself no stranger to the art of feeding its readers a diet padded with fiction. There, hack Richard Gray notes that Huhne did not give a figure for the climate aid package announced last week in advance of the UN summit on climate change in Durban, so he makes one up.

“Sources close to the Government ... have revealed that the announcement could bring the amount of spending in Africa on climate change up to £1 billion over the next four years”. Sources? More than likely the paper’s own political hacks: this can then be explained away as being “close to the Government”, as of course could anyone standing outside Portcullis House. 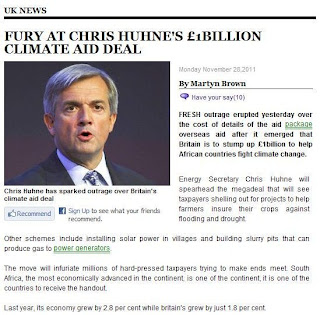 But that’s good enough for the Express, as Brown explains “Fresh outrage erupted yesterday over the cost of details of the aid package overseas aid”. Er, what? But there’s more: “South Africa, the most economically advanced in the continent, is one of the continent, it is one of the countries to receive the handout”. This is supposed to be a serious newspaper? 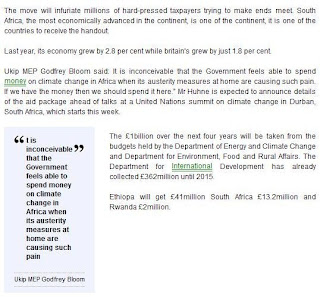 Anyway, Martyn, tell us about South Africa. “Last year, its economy grew by 2.8 per cent while britain’s grew by just 1.8 per cent”. So Britain is no longer so great at the Express. But not to worry, there’s a quote from someone in UKIP. With the opening quotes missing. And then readers are told that “The Department for International Development has already collected £362 million until 2015”.

Is there any more of this dodgy copy? Just a mildly garbled “Ethiopia will get £41 million South Africa £13.2 million and Rwanda £2 million”. That’s what you get by sending all those sub-editors down the road. And the £1 billion figure is suspect enough for the Daily Mail, not exactly Huhne’s biggest fan, to be headlining with a more modest £330 million.

Second-hand fiction that your hacks can’t even copy straight? That’ll be another Benchmark Of Excellence.

[The story was still there on the Express website, uncorrected, at 1200 hours today]