It was inevitable that, following Alastair Campbell’s appearance before the Leveson Inquiry today, the obedient hackery of the legendarily foul mouthed Paul Dacre would pass adverse comment. As of now, the routine character assassination has been deferred, but it will doubtless follow as night follows day. But the falsehood is there for all to see, a deliberate attempt to get the mud to stick. 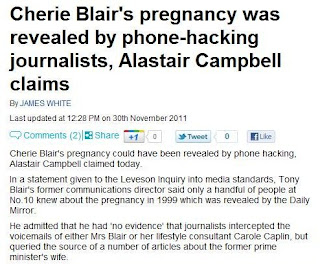 The headline is unequivocal: “Cherie Blair’s pregnancy was revealed by phone-hacking journalists, Alastair Campbell claims”. But Big Al has never made such a claim. Could this be something to do with the pregnancy being revealed not by the Mail, but the Daily Mirror? And that Paul Dacre despises the concept of “editorial celebrity”, especially as practiced by Piers “Morgan” Moron?

Indeed, in the very first line of the piece, the assertion is merely “Cherie Blair’s pregnancy could have been revealed by phone hacking, Alastair Campbell claimed today”. After all, as is also reported, Big Al “had ‘no evidence’ that journalists intercepted ... voicemails”. But the initial assertion matches that made on Sunday by the perpetually thirsty Paul Staines.

And by the time many obedient Mail readers have read past the headline, their minds have been made up, and they will skip that first line of body text as it looks so similar. Dacre is clearly trying to point the finger anywhere else in order to stop anyone looking too closely at goings-on at the Mail. It won’t work.