Starkey’s Spin Doctor – And His Fans

For such a learned fellow, David Starkey has a remarkable gift for opening mouth and inserting foot. Much of the time he seems unaware that this is not always the best course of action, as happened when he got off to a particularly bad start on Channel 4’s Jamie’s Dream School. The lesson remaining unlearnt, Starkey appeared on Newsnight yesterday and went one better.

The subject – inevitably – was the riots that had broken out in London and other cities around the country. Starkey kicked off by almost saying “Enoch was right”, but fortunately qualified his statement to avoid the potential trap. But this was merely delaying the inevitable, as The Great Man opined that “the whites have become black” and that “so many of us have this sense of literally a foreign country”.

It got worse. “Listen to David Lammy ... if you turned the screen off so you were listening to him on radio, you’d think he was white” pontificated Starkey, rounding off a series of remarks that, at best, have to go down as singularly unfortunate. But help was at hand from the loathsome Toby Young, whose attempts to apply positive spin would make Alastair Campbell recoil in horror.

There was, for Young, a straightforward explanation: Starkey was only meaning a particular sub-culture. He was referring to this, and not to skin colour. Suitably rigorous use of the OED was cited in support of his argument. Starkey could have made his points more clearly. It was just “Starkey being Starkey”, although at least we were spared an instance of “where’s your sense of humour?”.

Starkey’s TV career may be under threat, and brave stab though it is, Young’s intervention will not help, and nor will it prove an effective spin exercise. But those who comment in the bear pit that is Maily Telegraph blogland are supportive. 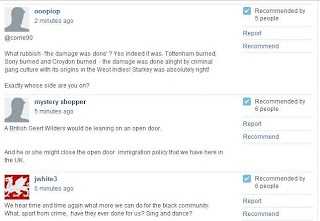 Here are three comments, all of which are recommended by others, with the third of forthrightly antediluvian stance. 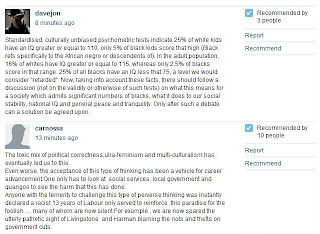 And here is one commenter with results of supposed IQ tests talking about “a solution”, and another who has been reading too many Melanie Phillips columns. 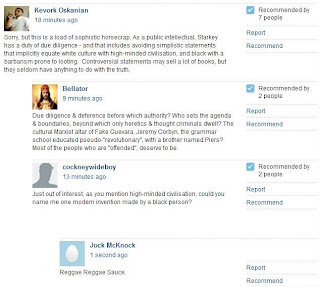 Then someone trying to post a dissenting view is shouted down, with a supposed joke at the end of the thread. Richard Littlejohn would be proud of that one.

And these comments are made in a forum that is supposed to be moderated. One of those comments has since been removed, and another edited, but only after Toby Young knew I had taken screenshots, something he acknowledged in a characteristically snarky Tweet. Young’s apology for Starkey is thought provoking – even if one disagrees – but Maily Telegraph blogland is beyond the pale.

I didn't know how to take the Reggae Reggae Sauce joke initially; on the face it's either a clever turnaround or disparaging nonsense.

"White Kids do speak in Jafaican accents, how is that not acting black? Bare facts an insult to liberal left?"

It seems he has only been registered a day or so and only to comment on these types of articles.

[On Starkey's appearance] "Jock McKnock has commented Friday, August 12, 2011,23:52:22
Yep, he dropped the nuke. He made a true, logical, undeniable point. He will now be utterly crucified."

Make up your own mind I say...

'Bellator' has repeatedly posted comments filled with anti-Semitism and incitement to violence -- he even praised the actions of Anders Breivik in one post that was removed after many hours. His moniker on the Telegraph comments links to his blog which in turn links to the website of Holocaust denier Michael Hoffman. His Blogger profile also lists Holocaust denial sites in the "blogs I follow" section.

And it won't surprise you to know that 'Jock McKnock' is following Nick Griffin on Twitter.

Speaking of Twitter, have a look at what Damian Thompson has been saying there. What a charming man he is...

No, I'm not surprised at all.

Damian Thompson is someone I'll be watching closely along with his partner in crime Ed West.

I've got a new blog too if you wouldn't mind linking to it?