After the atrocities come the acts of remembrance: getting the memorials right is a difficult job, as there are those to remember, a mood to set, a reminder not only of something lost, but also of a more hopeful future. Madrid suffered its day of infamy on March 11, 2004, with London’s being on July 7 the following year. In both cities, a corner of a large public park hosts the memorial.

On the first anniversary of the Madrid bombings, the Forest Of Remembrance was inaugurated by King Juan Carlos and Queen Sofia. It is located in the Parque del Retiro, just outside the city wall. Those who died are represented by 192 olive and cypress trees, the green hill surrounded by a channel of water. The memorial is close to the Estacion Puerta de Atocha, where most of the casualties occurred. 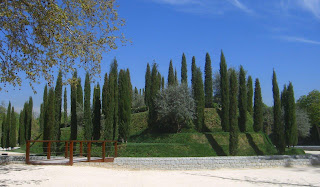 There is a path to the top of the hill, and the memorial is open to all, although watched over night and day. It provides a place for quiet contemplation, even though there is heavy and persistent road traffic close by. In this, there is a direct similarity to the memorial to the attacks in London. 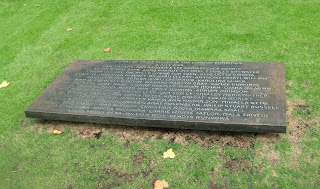 This took longer to bring to reality than that in Madrid, and was unveiled in 2009, on the fourth anniversary of those attacks. The setting, in Hyde Park, is surprisingly quiet, considering that Park Lane and its traffic is visible in the background. The names of all the 52 who died in the four attacks are commemorated on a plaque at the rear of the memorial. 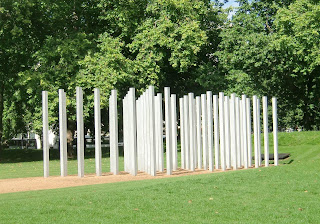 Each individual is remembered by a steel column, these being grouped to depict those lost at Aldgate, Edgware Road, near King’s Cross, and in the bus bombing at Tavistock Square. The 52 stelae were individually cast and, while all are similar, are equally individual.

Both memorials are worth a detour from the tourist trail, and worth a period of reflection. They show that, although the style of memorial may differ from one city to another, there is still the act of remembrance.