Guido Fawked – No Research, No Result (7)

Despite having no new information to hand, and precious little in the first place, the perpetually thirsty Paul Staines, who styles himself Guido Fawkes, continues his campaign against the appalling Piers Morgan, telling in a recent interview that this was because Morgan was well known. And he is talking the most blatant and disingenuous bullshit. 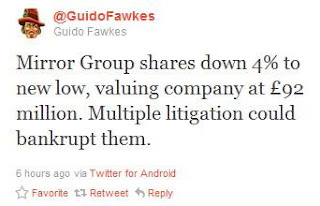 As I’ve already shown, Staines’ real motive is to go after those rotten lefties who took down his beloved Rupe. So he has gone after Trinity Mirror, whose Daily and Sunday Mirror are left leaning titles, boasting to his Twitter followers that he could bring the company down, while not telling those followers that there are such things as insurance.

And he has also now gone after the Guardian and Observer, not because their editors are well known, but because he sees these, too, as home of more rotten lefties. After all, it is via the Guardian that Nick Davies brought the unfolding story of Phonehackgate. So Staines has today attacked Guardian hack David Leigh (the paper’s defence could be interesting, mind).

Staines continues to try and paint the Sven’n’Ulrika story as the product of Mirror hacking, despite all the evidence – even in Private Eye, not a friend of Morgan – saying otherwise. And he even suggests he has contacts at CNN, telling “There’s absolutely no question that he knew about hacking. People who work for him tell me this”. I doubt he has talked to even one person at the cable news channel.

But what is equally telling is the list of papers that Staines is not going after, and won’t be going after: the Daily Mail, Mail On Sunday, Daily and Sunday Telegraph, Times and Sunday Times. The Daily Mail was Steve Whittamore’s largest single customer. The Sunday Telegraph routinely used the Dark Arts. As Nick Davies told in Flat Earth News, the Sunday Times even hired former hack David Connett as a freelance PI with no staff email address – but he worked in their offices.

Paul Staines will not be going after any of these titles, and for one very good reason: he does business with at least some of them. And, as I’ve shown, he isn’t going after Piers Morgan just because he’s well known, but because he wants to score some revenge. And thus far, it’s not working: Ken Jautz, the head of CNN’s USA operations, says he’s standing by Morgan, who was second highest rated host on the network last month.

The only way Paul Staines, or anyone else, is going to change that stance is to do some proper investigation and bring forward new information that changes the game. Picking quotes out of old copy and exaggerating and misrepresenting them isn’t going to cut the mustard. Must try harder.

this is good stuff.