Oh Brother – What A Let Down!

Back in early April, Zelo Street looked at the over optimistic publicity being generated by the Desmond press over Celebrity Big Brother, and observed that many of the names being pitched “could do without the attention of Dirty Des’ forthcoming new acquisition”. So how many of those names actually appeared on the show’s opening night?

I’ll credit the original Daily Star “exclusive” with one accurate guess – reality show fixture Amy Childs – but she had been so low on the radar that I didn’t consider her worth mentioning at the time. But that is the limit of the article’s accuracy.

So who didn’t turn up? For starters, the deeply unpleasant Mohamed “you can call me Al” Fayed didn’t show. Football pundit Andy Gray wasn’t in the line-up either, and neither were rapper Tinie Tempah, former occasional royal love interest Chelsy Davey, boxer Ricky Hatton, Peaches Geldof, or Tara Palmer Tomkinson (OK she wasn’t in the original list, but I suspect was approached).

There was no sign at all of the evergreen (and sensible enough to bodyswerve CBB) Joanna Lumley, and two names pitched regularly during the summer – former boxer Mike Tyson and ex Baywatch Pamela Anderson – also managed not to be anywhere near the launch celebrations. 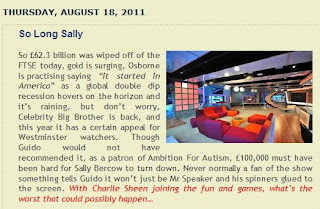 Got that one wrong - again

And, as anyone with brain engaged prior to opening mouth knew from the start, the rumours about Charlie Sheen were not worth the hot air from which they had been cobbled. That, though, didn’t stop the perpetually thirsty Paul Staines, who styles himself Guido Fawkes, from being taken in. Not that he’ll be issuing any kind of mea culpa – after all, why change the habit of a lifetime?

Ratings prediction for CBB? That 5.1 million for the launch show will be seen as a fond memory in a couple of weeks’ time. Richard Desmond needs to understand that, unless he’s prepared to spend serious money, he will get a line-up that is not worth tuning in for. This collection of nobodies is the biggest let down in the UK history of CBB.