Guido Fawked – No Research, No Result (9)

While the runaway train that is Phonehackgate rumbles on, attempts continue at the Guido Fawkes blog to make a case against Trinity Mirror, on the basis of no evidence at all, and merely because the routinely clueless and perpetually thirsty Paul Staines is desperate to score some revenge against those rotten lefties who, in his mind, brought low his beloved Rupe.

And yesterday brought a superb example of why I describe the increasingly portly Staines as “routinely clueless”: the Fawkes blog ran a post titled “Beckham Hacking: Mirror Cover-Up (Part 1)”. Here, the inference was made that hacks at one or more Trinity Mirror titles were indulging in hacking phones used by those working for the Beckhams.

Moreover, the suddenly emboldened Staines has faxed a letter to Mirror Group legal director Paul Vickers under the aegis of the so-called “Sunlight Centre for Open Politics” on the case of a hack called David Brown. “We have been told that in 2007 a People journalist called David Brown was sacked for ‘gross misconduct’” asserts Staines, thus spraying his credibility up the wall in one go. 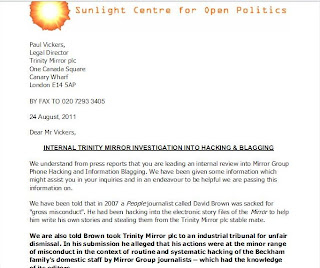 File that in the bin when the laughter stops

Because, had the clueless Staines bothered to do a few minutes’ Googling, he would have found that not only is the David Brown case no secret, but also that he has not even got the year of his dismissal right. Brown – along with Mirror hack Paul Gallagher – were initially suspended after stories from the Daily Mirror news list had appeared in the People, in March 2006.

Both men were dismissed the following month, and thanks to the Press Gazette and Guardian, we can pinpoint the exact date, that being Wednesday the 5th of April. And, had there been any noises off over an “industrial tribunal”, which Staines suggests in his letter, Private Eye would have been on the case. Thus far, a scan of the Zelo Street Eye archive has not unearthed anything on the subject.

All of which suggests that, rather than quaking at the inquisition of The Great Guido – a scenario Staines suggests all too regularly – Paul Vickers and his colleagues at Trinity Mirror will have been laughing like extras on a Smash advert at yet another example of lamentably poor research. If this is the best that Mr Clueless can manage, Sly Bailey and her staff can sleep easy.

Because, as I keep saying: No Research, No Result. I can’t wait for Part 2 of this expose – maybe this is where Staines gets the date right. Or gets something right. After all, he’s Number 1, you know.