Look Over There – Not That We’re Guilty

The obedient hackery of the legendarily foul mouthed Paul Dacre spent last week telling their readers that phone hacking was no big deal: twice his obscenely overmonied churnalist Richard Littlejohn pitched that message, then Amanda Platell, his resident Glenda, reinforced it yesterday. But now – guess what? – comes the message that it is serious, but only when another paper does it.

And that other paper is the Guardian, so the disciples of the Vagina Monologue can kick the title that brought Phonehackgate to life, trowelling on the suggestion of hypocrisy and lawlessness. Indeed, the headline proclaims “Now Guardian reporter is to be quizzed by police after admitting phone hacking”. Except that the reporter in question isn’t yet facing police questioning. 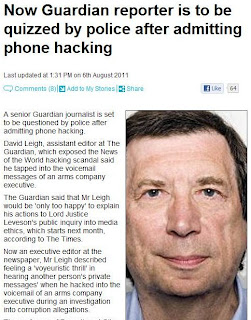 David Leigh – whose photo has been heavily cropped by the Mail to make it appear in the style of a prison mugshot – has openly admitted listening to the voicemail messages of an arms company executive while investigating corruption. Leigh, who has asserted that his actions were in the public interest, has never attempted to cover up the episode, which he reported five years ago.

And the Mail article concedes – right at the end, as is usual in Dacreland – that Leigh is not yet being hauled in by the Met: “Scotland Yard said it’s [sic] Operation Weeting team, which is investigating hacking is aware of Mr Leigh’s admission but refused to comment”. But by this point, the smear has been delivered: the rotten lefties are the guilty ones. Note also that the story carries no by-line.

Of more interest than the re-working of old news into a contemporary smear is the source of the Mail story: step forward the perpetually thirsty Paul Staines, who styles himself Guido Fawkes, and who has been putting the boot into the Guardian – as well as the Mirror – for some days now. Staines has already worked with the Mail on his failed attempt to topple William ‘Ague, and his campaign against Chris Huhne.

Staines ran his first attack on Leigh on Friday last, thus giving his new pals in Dacreland plenty of time to cobble together their copy. But he didn’t do his credibility any good today by asserting that the Screws hacked Margaret Thatcher’s calls in 1987: what Rupe’s troops were doing – scanning is the usual term – wasn’t hacking, and back then it wasn’t illegal.

But Staines is in tune with his new friends: accuracy isn’t the point for the Mail, but getting at the target of the attack certainly is. Expect more of this in the coming days, with Staines not saying anything against the followers of the Vagina Monologue, while kicking those rotten lefties, not that he’s a vindictive tribalist, of course.

He wouldn’t want to endanger his nice little earner.

Worth noting that pre-October 2000 when the Regulation of INvestigatory powers Act 2000, Part 1 chapter 1 came into force there was the Interception of Communications Act 1985 (which a large part of chapter 1 of RIPA largely repeated) which made intercepting communications on the public telephone network a criminal offence. There was no public interest defence for intercepting communications under the 1985 Act. Nor is there a public interest defence under RIPA.

The post from Guido that you link to alleges that the Guardian group (through The Observer) used the same investigators as the News of the World. He refers to the Operation Motorman report from the ICO in 2006 (WHat price privacy now?). This related to one private investigation business (that of Steve Whittamore) and The Observer had over 100 transactions with him commissioned by 4 journalists that appeared to contravene s 55 of the Data Protection Act 1998 (to which there is a public interest defence). The statement by then editor Roger Alton at the time seems to accept that not all of the instances of investigation by The Observer were in the public interest (meaning that some were illegal under s 55). The Observer though has said something about the Motorman report *(although I have asked questions about whether it used any other private investigators and they have not answered these). Top of the list in Motorman was the Daily Mail with 952 transactions commissioned by 58 journalists. There has been no explanation about whether any of these were in the public interest. There has been no consideration of the question of whether other investigators were employed. And Dacre of course gave an unqualified denial in relation to printing material based on hacking during his evidence to Parliament on the Defamation Bill.

In Leigh's case the crucial question is when did the activity take place. If after RIPA came into force a criminal offence was committed. If before the INterception of Communications ACt may have applied depending on the system contacted, and the nature of the contact. The case law on the 1985 Act was not as clear as it could be.