Come On Mel! Over The Top!!

It is not easy to deduce any common thread running through the various acts of disorder that have been raging through parts of London overnight. What started last week as a protest following the fatal shooting of Mark Duggan by Police in Tottenham has somehow mutated into arson, looting, robbery and confrontation on a scale not seen in the capital for many years.

This has not stopped hacks, pundits and bloggers from observing the carnage through their own particular prism and reaching a conclusion in the same manner as the Daily Mail writes the headline and sub-heading, and then selectively uses or discards facts to make the story fit. Others, like the supremely intolerant Roger Helmer, who is apparently an MEP, are advocating summary executions. 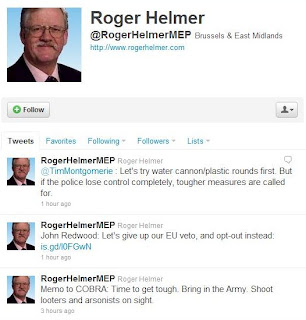 Helmer’s view is but one of many out there on the right – so who can this disparate band of ranters rally around? Where is the standard bearer in this time of need? One blogger has the answer: step forward the perpetually thirsty Paul Staines, who styles himself Guido Fawkes, and who has found his hero and cited her at length in his “Quote of the day”. It is, he has Tweeted, a voice of “calm sanity”. 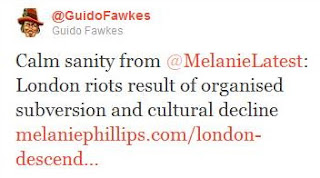 You read that right ... very right

That voice belongs to Melanie Phillips. No, really. So what calm and sane message does Mel have for us today? 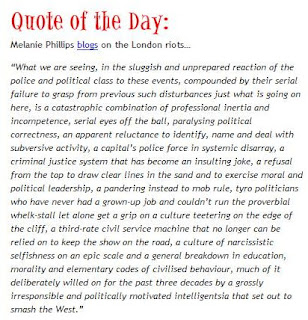 Just in case you thought he didn't mean it

Put directly, it’s the lefties: Mel says they’re hijacking specific protests, just like the G20 and the student fees ones. Those rotten lefties again – they get everywhere! So what are they after? Mel’s got that covered: “to bring about the End Of Capitalism As We Know It”. Strange, from what I could see, the thing that linked much of what happened yesterday was that it wasn’t organised.

But Mel is just warming up – there is also “paralysing political correctness ... a capital’s Police force in systemic disarray, a criminal justice system that has become an insulting joke”. Stop right there. What the hell does looting and arson have to do with political correctness? And what does the justice system have to do with it if none of those involved have seen the inside of a courtroom?

Whatever. There’s no stopping Mel. And the conclusion is on an epic scale: “a general breakdown in education, morality and elementary codes of civilised behaviour, much of it deliberately willed on for the past three decades by a grossly irresponsible and politically motivated intelligentsia that set out to smash the west”.

It must have been a task and a half to keep the Muslims out of that rant. One thing is for sure, this wrong-headed petulance is neither calm nor sane, and will get us nowhere. That the likes of Staines holds Mad Mel in such high regard says much about his own relationship with reality. Fortunately, others are making the decisions.

[UPDATE: the actions of Roger Helmer have proved too much even for those over in the bear pit that is Maily Telegraph blogland, where Daniel Knowles has called him out for "reactionary Blimpery" and has urged Young Dave to personally expel him from the Tory Party. As Cloughie might have said, well done young man]