With the Royal Wedding now fading into memory, the presence of a variety of protesters in Parliament Square has also fallen from the radar of the why-oh-why part of the Fourth Estate. And there has been no recent sounding off on the matter from London’s occasional Mayor and regular collector of “chicken feed” from the Maily Telegraph, Alexander Boris de Pfeffel Johnson. 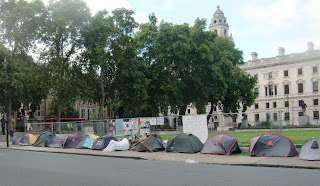 The tents: all along the south side ...

The lack of any recent pronouncement from Bozza may not be unrelated to the inconvenient fact that not only are the protesters still there, but that they also seem to be increasing in number. This is particularly noticeable at the south west corner of the square: the tents stretch along almost the whole of the south side now. 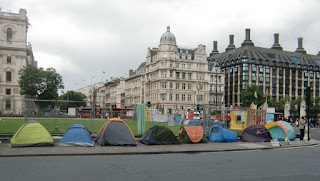 And the original peace camp, still there on the east side of the square even after the passing of Brian Haw, does not seem to be related other than in name to the rest of the temporary inhabitants, many of whom are protesting variously about Korea, money, the riots, freemasons, imperialism, and surveillance. Only a few are still majoring on the Iraq adventure. 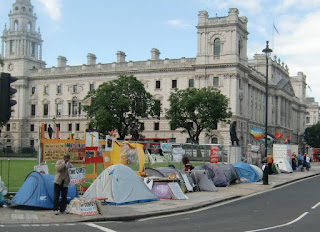 ... and up the east side of the square

In the meantime, most of the square is fenced off by a line of unsightly barriers, just as it was earlier in the year, and indeed as it was last year around this time. Bozza’s noises off in January – in concert with Young Dave – may have pleased the followers of the Vagina Monologue and scored him a few column inches, but all the bluster and legal action has brought little return.

It will be interesting to see how much hot air is expended on this business in the run up to next year’s Mayoral elections, and equally, how much buck passing is performed as Bozza tries to bodyswerve the whole issue and dump it on Westminster Council – who are responsible for the pavement on which all the tents are located.

[The photos accompanying this post were taken on Saturday last, 27th August]