Today sees the return of the Daily Mail’s obscenely overpaid and woefully untalented churnalist Richard Littlejohn, back from holiday in Florida to, er, holiday in Florida. Dick’s latest effort to justify his trousering close to a million notes a year is as turgid and slanted as ever, but there is a nugget of information tucked away towards the end that gives away the mood in Dacreland. 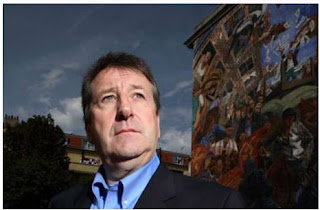 “A couple of weeks ago, MPs were excoriating the Police for failing to properly investigate phone hacking” asserts Dick, while not telling that this mainly meant Yates of the Yard not being prepared to lower himself to open the Mulcaire bin bag. And anyhow, apart from Littlejohn getting a long word into his argument, so what?

Well, Dick is trying once again to equate Phonehackgate with crime as a whole, as he then tells “Now it has been revealed that one in three of all crimes reported are never investigated because officers believe they can’t be solved”. Very good, Dicky boy. That news is just two months old. But do go on – you usually do.

“Last year, 650,000 crimes were ‘screened out’ – everything from cycle thefts, up to and including drug-trafficking and violent sexual assaults” Littlejohn continues. Also very good, but if the Police consider there to be no chance of solving the crimes, just how much of their limited resources should be thrown at them? If the cost of policing started rising, the Mail would be arguing the other side in short order.

And anyhow, what point is Dick trying to make? As if anyone was in any doubt: “Since most people would be more concerned about getting their bike back than finding out who listened to Jude Law’s voicemail, can we now expect a frenzied Parliamentary enquiry into this outrageous dereliction of duty?”.

So there you have it. Littlejohn says going after illegal activity within the Fourth Estate – the source of his vastly inflated remuneration package – is A Bad Thing, and that it’s some kind of zero sum payoff where domestic crime could be getting more attention, if only the law would leave his pals alone.

And it’s grade A bullshit: what Fat Dick is really saying is that enquiries should stop before they reach the door of his legendarily foul mouthed editor and therefore threaten his livelihood. Dick, we know you’re a Dick. Don’t take us for fools. If your pals at the Mail were involved, don’t expect that shouting “look over there” will let them off.

But thanks for admitting that the Daily Mail was at it as well.