The press empire of Richard “Dirty” Desmond may consist of four national newspapers, but the number of hacks and editorial staff turning them out has declined dramatically since Des took over. So papers like the Express display more reliance on stories that aren’t, while the quality of even the spelling suffers with the lack of subs. 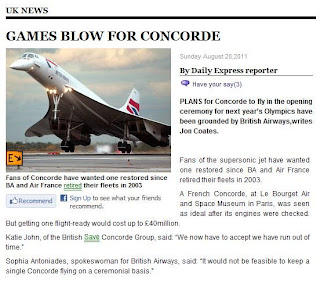 Non-existent stories are typified by this piece suggesting that there was ever a chance of one of the surviving Concorde fleet flying again, specifically as part of a fly-past for opening next year’s London Olympics. Nobody even considered such a move: the cost would have been prohibitive, and there was always the small problem that Airbus Industrie would refuse to renew the type’s airworthiness certificate.

Moreover, the Express story hasn’t been thought out: British Airways is blamed for the flight not going ahead, but the plane that is being discussed is not one of theirs. 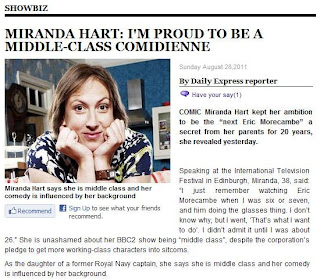 So much for the ability of Express hacks to produce “stories” out of almost no source material at all – what of the spelling? Well, yes, today has brought that as well. Although the piece has now been corrected, a screenshot has been taken, and now has pride of place among the litany of routinely dreadful Express spelling howlers – until the next one comes along.

Yes, “Daily Express reporter” cannot spell the word Comedienne. What the paper is using for input is not known, but my version of Word auto corrected the howler when I tried to replicate it. The article is otherwise yet another piece of filler knocked together from a photo and a couple of quotes taken from material already published elsewhere.

As such, it’s situation normal for the Express.