Almost two years ago, along came an event that was manna from heaven for the climate change denial lobby. Here was Climategate, supposedly the final nail in the coffin of Anthropogenic Global Warming (AGW): over a thousand emails from the University of East Anglia Climate Research Unit (CRU) had been released into the public domain.

For James “saviour of Western civilisation” Delingpole, this was fatally damaging to what he saw as a conspiracy, which had been “suddenly, brutally and quite deliciously exposed”. And thus Del Boy set out to make a non-trivial amount of dosh out of Climate Change by accusing others of, er, making non-trivial amounts of dosh out of Climate Change.

Del’s mentor Christopher Booker went further: this was “the worst scientific scandal of our generation”, our scientific establishment was “hopelessly compromised”, and it was “shocking”. Moreover, this was merely part of a “closely knit group of American and British scientists” promoting the “hockey stick” graph, the work principally of one Michael Mann of Penn State University. 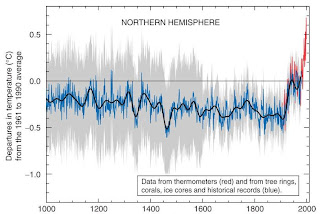 So, although no formal allegation was ever made about him, Mann was duly investigated by a board of enquiry at Penn State. This reported back in February 2010, and concluded that there was no evidence that Mann had suppressed or falsified data, tried to destroy data or emails, or misused information. A second panel would consider whether Mann had been guilty of misconduct.

And now that panel has reported: the conclusion has been that Mann is not guilty of any professional impropriety, this being essentially upheld by the Inspector General’s office. The review concluded “lacking any direct evidence of research misconduct ... we are closing this investigation with no further action”.

What you will not see at the Telegraph. After all, following that first investigation, Del Boy sneered that he was “as innocent as OJ”.