As if David Starkey had not produced sufficient incendiary comments in his appearance on Newsnight, along has come James “Saviour of Western civilisation” Delingpole today to hurl a few more grenades onto the bonfire. Del Boy has gone all Spartacus as he tells “If David Starkey is racist then so is everybody”, an assertion he supports with the usual sneering and abuse.

Del Boy has concluded that Starkey, rather than having opened mouth and inserted boot in a less than wise attempt to be edgy and controversial, was the victim – remember Olbermann’s dictum when viewing the actions of those on the right – of a BBC “trap”. He reinforces this view by accusing the Beeb of being the “puppet master” of Starkey’s opponent Owen Jones.

But there is some praise from Delingpole, not least for the loathsome Toby Young, whose clumsy intervention he describes as “brilliant”, because he agrees with it. Del Boy cannot bring himself to credit anything of dissenting view, so anyone he can find in that area is subjected to the customary carpet bombing of abuse. And for those who think they’re hard enough, Del deploys the whataboutery.

“Does anyone ... want to persuade me that this is but one tiny and much-exaggerated facet of a broader black culture dominated by opera and madrigal singing and crochet and sonnet-construction [sic] and lawn bowls and Shakespeare and new translations of Ovid?” he sneers, meaning he’s terribly clever and if you mess with him, his mountainous intellect will utterly crush you.

In any case, Del Boy has the causes of the riots figured out: “Like the Guardian – and the Labour party – the BBC created the culture that led to these riots” he concludes, which means that if you’re going to pull a whopper on your readers, you might as well make it a proper one. But his adoring commenters loved it, so much so that the sewer positively stank in the aftermath of his posting. 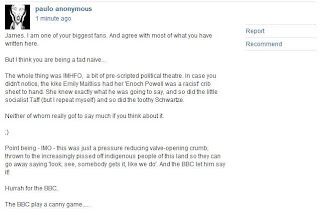 Here, one inventive soul calls BBC presenter Emily Maitlis a “kike”, and the other guests “Taff” and “Schwartze”. 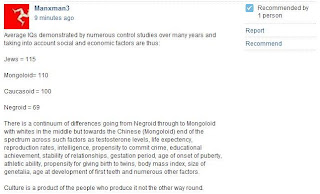 Another commenter – note, not the one noted replying to Toby Young – trawls the depths of the IQ smear. 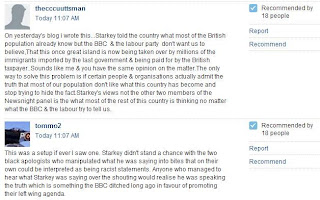 And there has to be a routine outburst of paranoia.

The comments are included not because of any desire for censorship – the usual accusation from the right – but because the Telegraph is supposed to be a quality paper, yet its website is host to a cocktail of Anti-Semitism, racism and virulent abuse. And until this sewer is cleaned out, I will continue to point this up.

I complained about the reference to Emily Maitles as a kike hours ago - but it remains.