Guido Fawked – No Research, No Result (6)

Consistency is one of those early casualties when desperation sets in and the scattergun comes out. This was demonstrated superbly today when the perpetually thirsty Paul Staines, who styles himself Guido Fawkes, tried once more to shift some of the blame for Phonehackgate away from his beloved Rupe and on to those rotten lefties, his chosen target once again being the appalling Piers Morgan.

Only last week, Staines was scolding Morgan for using Private Eye in his defence, so to quote from the Eye was clearly A Bad Thing. But today, Staines decides to kick Morgan by, er, quoting from the Eye, although for some reason he crops the feature on Page 6 of issue 1294 very selectively. Why might this be? 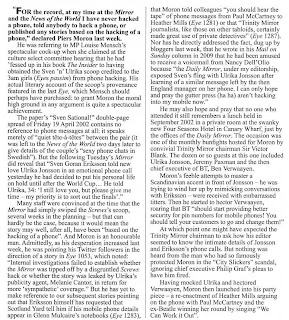 Well, to show the whole of the article (see above) would reveal that it was the Screws that told its readers of Sven-Goran Eriksson and Ulrika Jonsson leaving voicemails in their native Swedish, and this calls into question Staines’ assertion that the Mirror had to have those messages translated. It would also show that the Eye is itself in scattergun mode: Glenn Mulcaire worked for the Screws, not the Mirror.

Moreover, it would show the Eye conceding its story in issue 1053, which I corroborated with three other sources, and that the Eye is making a very tenuous link between the Mirror and its story being “based on the hacking of a phone”. That would be down to what the Mirror and Screws hacks discussed in the pub – and it’s now one person’s word against another, following Sean Hoare’s recent death.

All this is important, because it undermines Staines’ continuing assertion – make that continuing wrong assertion – that the Mirror got the Sven’n’Ulrika story through its own journalists, or someone working on their behalf, hacking phones, and that Morgan as editor knew of this. Private Eye does not support this assertion. And Staines’ attitude in a recent Q&A with AdWeek doesn’t help his cause, either.

Just how much credibility can be ascribed to someone who says “when we know that the basic story is correct and we don’t have nine tenths of the building blocks and we’ve only got six tenths of the building blocks, we’ll go with it ... we are prepared to take flyers” I will leave to others, especially as the “basic story” is so clearly not correct, so much so that Staines has cropped out most of the Eye article.

As I said previously, Piers Morgan may be in the mire. He may not. But the story is not going to be moved forward by someone who admits “There’s an omerta at the moment in the British tabloids” and then runs a story that suggests otherwise, unless that story is significantly made up. Time for The Great Guido to get himself a few more building blocks.

The point is that Morgan ran a story that he knew to have been obtained by means of phone hacking - whether by his own staff or contracted private investigators, or those of the News Of The World. I believe Guido Fawkes and Louise Mensch have been disingenuous but I don't have a problem with misrepresenting or misinterpreting Morgan's comments if it ultimately serves public interest by forcing the truth to emerge.

What Morgan ran - you can see the corroborations via the links - he got from Melanie Cantor, Ulrika Jonsson's publicity agent.

The tip-off that provoked his call to Ms Cantor came from a conversation in the pub. Now how do you then pin hacking on Morgan from there?

To be honest, its how journalists USED to get their tip-offs - from a bloke down the pub. T be honest, this is a classic newspaper scoop. The fact that another newspaper was hacking Ulrika-ka-ka's phone is not Moron's fault, is it?