A surprise today from the empire of Richard “Dirty” Desmond is that the Sunday Express appears to have spent money with Angus Reid on a poll. This, in the paper’s lead story, is held to support “overwhelmingly” the reintroduction of National Service in the wake of the recent riots. But, strangely, little detail from the poll is given, and the company has not shown it on its website. 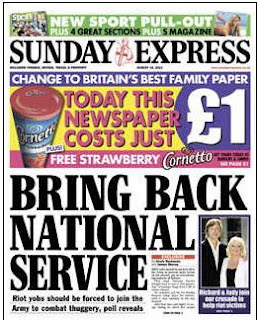 The idea of cutting benefit payments was also apparently surveyed: “Our poll shows the mood of the public is fiercely in favour of stopping benefits to punish the feckless families of violent thugs, with 70 per cent supporting an end of benefits for parents of yobs”. And what, again, was the question?

Nowhere are we told what was actually asked by the pollsters. It’s possible to guess, from snippets such as “Ninety four per cent said that poor parental control had contributed to riots”, and “Some 66 per cent thought ‘ineffective policing’ had contributed”, but nowhere does the Express lay out the questions asked, the choices for response, and percentages of those responses.

So the article says “the country says a tough Army regime is called for”, but is strangely reticent in giving its readers the evidence. And telling that “An exclusive poll for the Sunday Express today gives the Government a clear mandate on the way forward” is steaming bullpucky: the response of 2,000 to an opinion poll isn’t a “mandate” for anything.

If the Sunday Express really has commissioned a poll of over 2,000 people, then they will have the information on the questions asked and the responses given to hand. So before more of this hyperbolic rabble rousing gets published, perhaps Des’ finest might just give that information to their readers.

Or maybe Angus Reid will put the details on its website, which would be interesting.

The whole idea is crazy.

Surely training people in tactics & strategy, building up their fitness, teaching them unarmed combat techniques and giving them a sense of determination and self-belief is just going to make wresting control back from them at the next riot even more difficult.

Not to mention the disproportionate number of homeless people who are ex-forces.