Perhaps it’s another sign of the Murdoch mafiosi’s desperate efforts to finally get their hands on the 61% of Sky that they do not yet own: yesterday, after joining the Mail in smearing Steve Walker, the man behind Skwawkbox, the Super Soaraway Currant Bun backed down and issued one of those “corrections”, the kinds of admissions that used to have the rarity of rocking horse droppings. 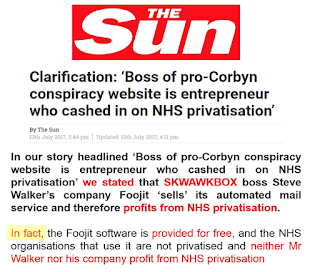 Under the heading “Clarification: ‘Boss of pro-Corbyn conspiracy website is entrepreneur who cashed in on NHS privatisation”, the Murdoch goons admit that their pants are, if not actually on fire, at least smouldering freely. “In our story … We stated that SKWAWKBOX boss Steve Walker’s company Foojit ‘sells’ its automated mail service and therefore profits from NHS privatisation” begins the explanation.

And then comes the admission: “In fact, the Foojit software is provided for free, and the NHS organisations that use it are not privatised and neither Mr Walker nor his company profit from NHS privatisation”. Oh dear! But that is not the end of the matter.

Mail Online also went after Skwawkbox, and its alleged associate global editor Jake Wallis Simons recently indicated he was not for backing down. Taking to Facebook to excuse his behaviour, he told “People have been claiming that his company, Foojit (Steve Walker is the Sales Director, note ‘Sales’), provides its services for free. Not true”. Wrong. Foojit provides its software for free. But do go on.

And he then admits this: “The company will install its mail software on your computer for free”. Then comes his justification for sticking out: “However, when you start sending letters through the system, there is a charge”. Well, knock me down with a feather - did anyone expect the company to do it for nothing? Hell’s teeth, they already gave away the mail software for free. How are they all expected to make a living?

Still, on he goes: “I also have Mr Walker on tape saying that he makes a profit from the outsourcing services he provides to the NHS”. That doesn’t excuse his claim in a Mail Online article, which is still live, that Foojit had “sold its mail system”, or the suggestion that the company benefited from selling off parts of the NHS, when all it does is provide the means to save money on mailing letters.

In any case, as the Sun has now admitted “the Foojit software is provided for free, and the NHS organisations that use it are not privatised and neither Mr Walker nor his company profit from NHS privatisation”, Wallis Simons’ wriggle room, whether he has anyone on tape or not (did he tell Walker he would be recording the conversation? If not, why not?), is now severely constrained. Because the Sun has effectively shafted him.

So how long will Mail Online hold out? The Sun has cut the ground from under its pals in the press establishment. It will be interesting to see the kinds of excuses provided by sham press regulator IPSO when it comes to dealing with Walker’s complaint.
Posted by Tim Fenton at 10:09

Its good to read the Sun and Mail would prefer Government to increase NHS budgets to pay for staff to print letters, stuff envelopes and operate franking machines.

Why don't they ever support the NHS being a truly closed system which employs all their staff and does not contract with any outside companies to undertake any day to day activities.

As regards the fooj.it system I suppose the author also complains that the Royal Mail provide letter boxes free of charge at convenient locations, but users are expected to pay every time they put an item in one!

So the daily mail didn't lie at all. They are pointing out hypocrisy between people who have fears of private companies being used to provide services related to the health service in our country, who at the same time provide a service to the NHS as part of a private company.


It sounds like foojit provides a useful system. And it's not clear to me that the mail has any problem with it. It's just the hypocrisy.

There might be some sort of reason why providing postal services to the BUS as a business is okay but running a hospital for the NHS as one is wrong but it's hardly an obvious distinction.