Charlie Gard, the terminally ill baby whose short life has generated so much attention, has died just before his first birthday. As the BBC has reported, “He suffered from an extremely rare genetic condition causing progressive brain damage and muscle weakness”. Charlie had been moved from Great Ormond Street Hospital to a hospice for his last hours. 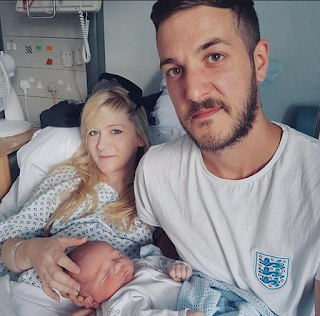 Charlie Gard with his parents

Much has been written about the case, and so many of those sounding off have been, at the very least, poorly informed. But what has been said by the British media is as nothing when set alongside the screaming and baying outpourings emanating from the USA, where for so many airing their views, ignorance is that most coveted of merit badges. 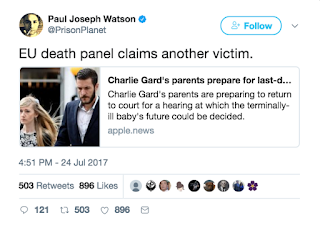 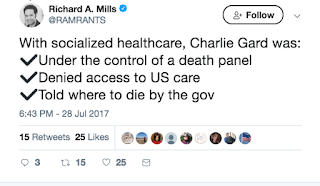 Many of those Stateside, and their hangers-on, did not need to debate the niceties of the Charlie Gard case: they knew what killed him, and it wasn’t a rare genetic condition. The brains trust on display included Battersea basement dweller Paul Watson, who concluded “EU death panel claims another victim”. Richard Mills went further: “With socialized healthcare, Charlie Gard was … Under the control of a death panel … Denied access to US care … Told where to die by the gov”. He’s a widely published writer. A stupid one. 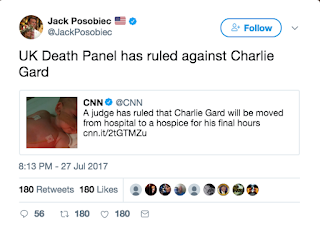 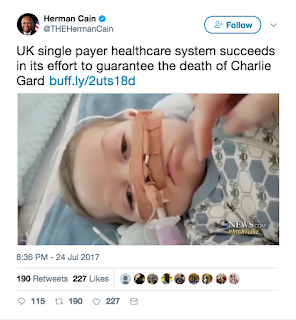 Jack Posobiec, another writer, also knew why Charlie died: “UK Death Panel has ruled against Charlie Gard”. The UK has a death panel, and no-one here knew! And there was another culprit, called the Single Payer system - well, you learn something every day. We know this because Herman Cain was on hand to tell “UK single payer healthcare system succeeds in its effort to guarantee the death of Charlie Gard”. 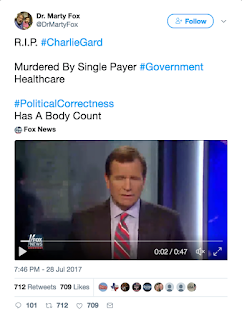 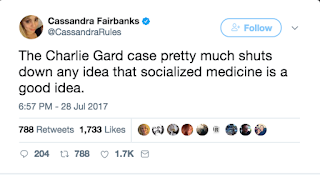 He once put himself forward as a Presidential candidate. And the US medical profession was at it too, Marty Fox (who you can tell as he’s a doctor) claiming “R.I.P. #CharlieGard … Murdered By Single Payer #Government Healthcare … #PoliticalCorrectness Has A Body Count”. Oh, and then there was socialised medicine. Cassandra Fairbanks knew that was A Very Bad Thing: “The Charlie Gard case pretty much shuts down any idea that socialized medicine is a good idea”. Another opinion former. Another well of ignorance. 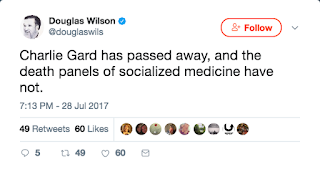 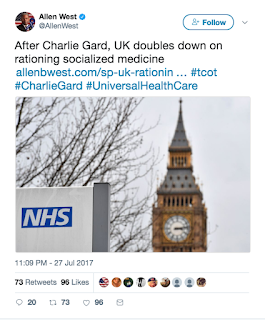 How about a view from the pulpit? Douglas Wilson is a Church minister, and he was sure Who Done It: “Charlie Gard has passed away, and the death panels of socialized medicine have not”. Elected representatives? Allen West, a former Congressman, asserted “After Charlie Gard, UK doubles down on rationing socialized medicine”. It does? Whatever.

Any more opinion formers willing to do stupid? Grant Kidney, podcaster and video maker, certainly was: “Charlie Gard is dead thanks to the wretched philosophy of socialism. Another baby butchered in the name of Leftist authoritarianism”. And PolitixGal was on hand to dispense the M-Word, too: “SOCIALIZED MEDICINE / GOVT-RUN HEALTHCARE murdered Charlie Gard! This is what Dems want for Americans & their children!” 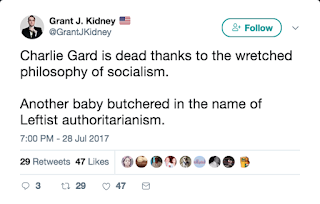 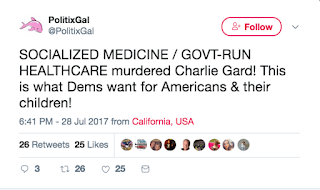 Charlie Gard could not have been saved by any health care system, anywhere on the planet. He was not butchered or murdered. There was no involvement from a “single payer system”. “Socialised medicine” did not affect his condition, and there was no “Death panel”. But there is a high incidence of wilful ignorance on view here.

The USA has, overall, less good health outcomes than the UK, which gets those better outcomes for a fraction of the cost. We need no lectures from the Stateside stupid.
Posted by Tim Fenton at 10:50

Melanie Phillips of all people wrote a very good column (I really never ever thought I would write those words) excoriating the American right wing idiots for their ignorance and sheer lies. The wonderful doctors at Great Ormond Street believed from evidence that the child was suffering and with no hope of recovery the least worst solution was palliative care. The court acted on behalf of the child in a dispute between medical opinion and parents but the Americans don't understand that our judiciary is vastly different from theirs or it appears, care. They just want to bash our health service which is still superb in comparison despite Jeremy Hunt's best efforts.

I would really like to know how much Charlie's treatment cost in UK terms and then compared to what it would have cost in the USA. We could then discover if any US insurance scheme - even under Obamacare - would have paid some of it, all of it or none of it.

The poor kid had the best and most appropriate treatment available and money was not an issue. The suffering of the child was.


Excellent piece here on the sad Charlie Gard case by @CharlesArthur to attempt to counteract all the nonsense, especially the nonsense coming from a number of those in the US.

Alas, all too predictable from the most institutionally corrupt nation on Earth.

US "culture" is riddled with the very worst of far right ignorance and madness. Even in medicine, supposedly the most altruistic and vocational of human activities.

And there isn't the slightest indication it will ever be anything other than the most deadly threat to world peace, truth and decency. It is a country on the verge of the same kind of mass insanity that overwhelmed Nazi Germany, Fascist Italy and Falangist Spain.

They hate the NHS because its success - in spite of tory/New Labour/LibDem economic and propaganda attacks - proves them wrong at every turn.

The USA is a sick country by almost every definition. A horrible aberration and an attack on the best of the human spirit. A place owned and run by suited up gangsters running a global protection racket. It will never improve.

"but the Americans don't understand that our judiciary is vastly different from theirs or it appears, care"

One vast difference from the US and UK judiciary is that it appears that the US version is very politicized with either Democratic and Republican supporting judges. At least in the UK we don't get that politicized bias.

The interesting thing is that for all the comments about 'death panels' euthanasia or assisted suicide remains illegal in the UK but is legal in the US. So the US does literally have death panels.

The US has much stronger parental rights than in the UK, for instance many states allow child marriage as young as 12 with parental consent but against the child's will. In most of the developed world the parents would be viewed as criminals. We have to recognise that the US view of parental rights is more absolutist. Just as the US constitution allowed people to be property with no rights (slavery), it continues to allow children to be seen as property of their parents to a greater extent than elsewhere.

What none of the US commentators seem to recognise is that in these cases there are three sides in the court case the hospital/medical team and their lawyers, the parents and their lawyers, and the child who has his own lawyer appointed to represent his interests. The child is recognised as a person in their own right, not merely subject to parental authority.

Nobody can take the Yanks seriously on the question of health.

Not when they judicially kill so many in the year 2017.

Or murder each other with guns.

Or invade other countries and mass murder anyone who disagrees with them.

I wish I thought they would get this worked up about the poor child health statistics regularly returned by the US.

One thing our right wing know nothing fanatics never mention is that we in the U.S. do indeed have death panels. They've been alive and well inside the accounting departments of every insurance provider for decades. Our medical industry is about Wealth Extraction, first, second and last, and nothing more. You people in the UK should keep your NHS. Maybe we'll live to catch up to you someday.

Melanie Phillips piece was notable for two things: she can write sane stuff if required and she totally ignored all the lies in the British press. It was definitely a call to "look over there!"