So the thirteenth actor to play the fictional Doctor Who, the role first played back in 1963 by William Hartnell (in black and white), is to be a woman. Jodie Whittaker will take over the part from Peter Capaldi at the end of the year. For many people, this is not the biggest of news stories, but for those who scrabble around the dunghill that is Grubstreet, it is an ideal way to score lots of free clicks and sales. 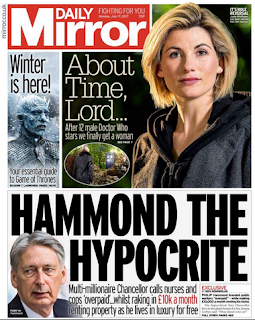 The Mirror is more than happy to see a woman play the Doctor, telling readers “About Time, Lord … After 12 male Doctor Who stars we finally get a woman”. The Murdoch Sun even makes the story its front page splash, telling “Regenderation Shock … Jodie is first woman Doctor … Kept big role secret for months … DOCTHER WHO”. So they’re just sore that nobody let them in on the secret.

But it is the Mail where a low moaning sound can be heard emanating from the Northcliffe House bunker. Teased on the front page by the why-oh-why “As Dr Who changes sex, why ARE male TV heroes being zapped?” The paper’s dinosaur TV critic Christopher Stevens has his instructions - kick the Beeb, and kick them hard.

From the start, women have to know their place: “Perhaps it’s my age, but there are some things I don’t feel happy discussing with a female doctor, and saving the world is one of them”. Poor Daily Mail. Still anally retentive, and still stuck in the 1950s.

“The announcement of Jodie Whittaker as the new incarnation of Doctor Who, replacing Peter Capaldi, has dealt another politically correct blow to a TV show that was once simply a children’s favourite”. See, it can’t be a children’s favourite with a woman playing the lead! And having a woman is just PC! Oh, and there’s a sneer at Ms Whittaker: “The new protector of the galaxy dyes her hair, apparently”.

Strewth, this is lame. It can’t get worse, can it? Maybe I shouldn’t have asked. “To the BBC’s embarrassment, top salaries across the organisation will be published later this week, and the numbers are expected to reveal a serious discrepancy between the earnings of its top male and female presenters”. Just the 100% irrelevant.

And it gets worse: “The Doctor spent much of the last series campaigning for gay rights across the solar system with his short-lived lesbian companion … Don’t expect this to stop now a woman is in charge. Never mind a police box - this new Doctor’s Tardis should be a soapbox. And that means Doctor Who, which has been steadily shedding its audience, is speeding towards its own doom - and the black hole of cancellation”. 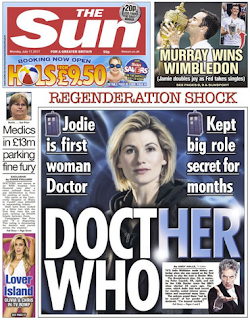 That’s a newspaper that has been losing readers and advertising revenue for years lecturing the BBC on how to score ratings. Stil, back to the moaning sexist nostalgia.

“The move heaps pressure on other TV and movie producers to be ostentatiously feminist. Already it’s rare to see a British detective show with a male lead … In almost every new British drama, men are relegated to sidekick status or else cast as moral weaklings with a vicious streak. Characters fall into two distinct categories: women good, men bad. Switching the Doctor’s gender is just another example of this endemic sexism in TV fiction”

Sexism? Who’s doing the sexism? But Stevens is just getting warmed up. “Even in telly’s most unlikely fantasies, the women rule while the men crawl. Game Of Thrones returns today with a woman on the Iron Throne, and another coming to claim it. The world of Westeros is now a femocracy … All this forces TV into narrow alleyways of story-telling, constrained by what is politically acceptable. Imagination is stifled when drama is forced to conform to ‘socially appropriate’ ideals”. Aw, never mind. Here’s an onion to hold.

Meanwhile, guess what’s coming next? Yes, it’s the rotten social media Wot Done It (that is, the megaphone over which the Mail’s legendarily foul mouthed editor has no control): “TV writers and film-makers who defy the trend will be condemned as sexist dinosaurs - and in this era of Twitter hate-mobs, that can be deeply unpleasant. Many will simply give in, and submit the same pre-approved plots about dauntless single mothers beset by psychopathic males”. Sob! Sniff! Snot fair!

But Stevens is not so far gone that he can’t slip the odd blatant lie into his copy. Watch carefully: “as every parent knows, children are a deeply conservative audience. They cannot abide changes to much-loved characters … children need positive role models - male as well as female … Transforming the Doctor into a woman will not please a single viewer under the age of ten”. Bullshit detector overload! 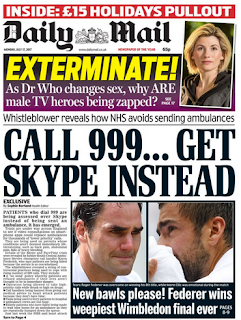 All those little girls thrilled that the new Doctor will be a woman were clearly figments of the imagination, then. But on Stevens whines: “Sadly, Doctor Who has been ravaged and wrung out in the name of political correctness for too long to be salvageable … It’s a miserable decline for a much-loved TV treasure … At least you know where you are with a Dalek (or maybe they’ll soon be female, too, with little metal tutus)”.

Is Christopher Stevens a real person, or just a Paul Dacre-activated phrase generator? I mean … “When the series was first conceived in the early Sixties, starring William Hartnell as the irascible First Doctor, the BBC had a more patriotic agenda”.

This article, and the miserable, mean-spirited attitude with which it is shot through, is typical of why the Mail is losing touch not just with all those social media users the paper wastes so much time slagging off, but even its own readers. Doctor Who, says someone who saw the first episode in November 1963 (twice, because the BBC screened it again the following Saturday), is a fictional character. That character can already regenerate and change all manner of characteristics - so why not have a woman playing it?

The same press dinosaurs said Doctor Who would not survive William Hartnell’s departure in 1966. Well, more fool them. Women can drive trains, they can fly airliners … and now they can make their own contribution to An Adventure In Space And Time.

Paul Dacre should have retired at age 65. It’s just been a miserable decline since then.
Posted by Tim Fenton at 13:04

In the same time period - Star Trek has had:

and soon will have a Black Female Lead character (Sonequa Martin-Green as "Number One" in ST:Discovery)

And I can't remember anyone in their media or Fox News having a tantrum about it...

These days the only thing coming out of "news"papers like the Scum and Heil is the stink of must and dry rot.

Their employees are the only ones not to notice they reek of it.

Poor thing. Maybe he thinks Doctor Who is a series of documentaries and not fiction.

"Moral weaklings with a vicious streak." From the Mail. My irony just exploded.

“When the series was first conceived in the early Sixties, starring William Hartnell as the irascible First Doctor, the BBC had a more patriotic agenda”.

Having a women in a lead role is unpatriotic....? Really?

What would Her Maj say to that I wonder.?

Or is that a dig at the Maybot?

Re: anonymous 13:28. With regard to Star Trek, we have also had a black main cast member playing a Vulcan - Tim Russ as Tuvok in Voyager. I don't recall any uproar over that either.

"The Mirror is more than happy to see a woman play the Doctor"
Um.
Doctor Who's new leading man 'has joined cast and could regenerate sooner than you think'
"Our source revealed: "Kris Marshall has already joined the cast and will regenerate at the end of this series, not in the Christmas special.
They won't risk a woman Doctor.

Mind the gap in the gender pay gap!

They really do objectify women, don't they?

I'm surprised they even like Dr Who considering that the Dr has over many incarnations had some very progressive ldeas. Being a pacifist for a start and having quite a few strong female companions. I very much doubt that any of them have actually watched it.

Not that it matters but two of the BBC's biggest exports of recent times (War and Peace and The Night Manager) had male dominated main casts. And there is of course the highly popular Poldark.

Still, no point letting facts get in the way of a good rant is there?

Mustn't watch the Alien franchise ever again as the main lead Ripley is a woman. Not to mention the new Star Wars releases as the main leads are also female. And don't get me started on Lara Croft....

What I want to know is - Where does the hissing/whistling lizard Hammond figure in this?

And what's with the Game of Thrones comparisons? The first book was published over 20 years ago. I know the TV shows don't completely adhere to the books, but the main characters are mostly the same.