After the wholly fictitious claim yesterday that there were moves to deselect Liverpool Wavertree MP Luciana Berger from within her own CLP - the right-wing press never does learn the lesson that they should not take the outpourings of the perpetually thirsty Paul Staines and his rabble at the Guido Fawkes blog on trust - has come yet more media hyperbole about the D-word - as well as the rather obvious reason for it all. 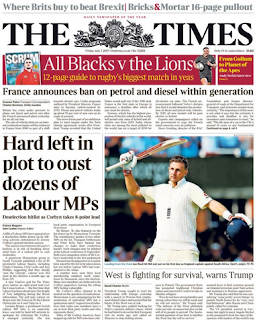 Leading the way with the latest, and equally fictitious, scare story this morning is the Murdoch Times, allegedly a paper of record, with the suitably frightening headline “Hard left in plot to oust dozens of Labour MPs”. Readers are told “A fifth of Labour MPs have appeared on a deselection hitlist drawn up by left-wing activists emboldened by Jeremy Corbyn’s General Election success … the uneasy truce between the party’s is at risk of breaking down amid fears of a radical plot to oust moderates”. This is total crap.

Yet the “story”, such as it is, has been pounced upon by the Sun, eagerly telling “radical supporters of Jeremy Corbyn plot to oust dozens of moderate Labour MPs in order to strengthen their hard-left grip over the country … a Labour hit-list has been drawn up by a grassroots Momentum group in South Tyneside aimed at unseating big names such as Chuka Umunna, Chris Leslie and Jess Phillips”.

And, not to be outdone, the obedient hackery of the legendarily foul mouthed Paul Dacre at the Mail have also lifted the Times “story”: “A Momentum group in South Tyneside has published a list of politicians who they say should 'join the Liberals’ … They include Chuka Umunna - who led a revolt against Mr Corbyn over leaving the EU single market - Chris Leslie and Jess Philips”. The Mail added a blatant lie, just to spice things up.

“The list emerged as it emerged that another moderate MP had been ordered to apologise to Mr Corbyn after a hard-left clique took over her local party … Luciana Berger, who is currently on maternity leave, was told by one newly-elected member of the executive in Liverpool Wavertree that she should 'get on board quickly' or face being axed”.

Where do we start? Ms Berger was not “ordered” to do anything, there was no deselection threat, and as for the “maternity leave” claim … SHE WAS THERE AT THE MEETING ON WEDNESDAY EVENING. But what of this “hit list” claim?

There was a posting on Facebook. That is all. Think about that. All those august defenders of our free and fearless press, ever ready to denounce the new media as Fake News merchants, while claiming to occupy the moral high ground, have based their attack on the Labour Party on nothing more than a single Facebook page. What status does the group concerned have within the party? The press didn’t bother finding out.

Had that been an attack on the Tories coming out of The Canary, Evolve Politics, Novara Media, Skwawkbox, or yes, this blog, it would have been denounced as hearsay from a dubious single source. But because the real press has run the story, it’s OK.

And the reason for the right-wing press panic? That, sadly, is all too straightforward: a new YouGov poll - for the Times, which is no coincidence - gives Labour an eight point lead. So the hysterical denunciation of The Red Team must be cranked up a few notches. I mean, actually doing factual journalism about politics? That’s just so Twentieth Century.
Posted by Tim Fenton at 10:30

One post on a Facebook Page with about 130 likes, which was later deleted. It made no threats, it simply detailed a long list of MPs with the comment "These 'usual suspects' should join the Liberals if they don't want us to hold on to millions of working class votes."

"This list is by no means comprehensive, there are a lot more so called Labour MPs who would happily go back into comfortable 'opposition' rather than fight the current system and represent the youngsters who back Corbyn and want to create a decent, caring and fair society for their kids and grandparents".

He and the other new CLP executive members say they want to work with Ms Berger, but said she will be accountable to them on future decisions.

Mr Bentham said: “Luciana needs to get on board quite quickly now.

“She will now have to sit round the table with us the next time she wants to vote for bombing in Syria or to pass a no confidence motion in the leader of the party - she will have to be answerable to us.

“We would like her to come out publicly like other MPs have done and apologize for not supporting him in the past.”

Also the remarks on twitter from Corbynistas about an MP that won a greatly increased majority shortly after having a baby - a collective "so what".
Leftie misogyny, not great.

It's not the policies that'll stop people voting for Corbyn, it's this kind of "send them for re-education" talk.

In the High and Far-Off Times the Redfellow, O Best Beloved, had no truck with moderation. He and his TCD Fabian circle regularly occupied the Church Lane corner of O'Neill's Moral pub.

So, in a spirit of lubrication, one evening the coterie were devising the tumbril list of class enemies: show-trials in Croke Park, public executions in Lansdowne Road.

The Redffellow wandered to the loo. Came back. Found he was #3 on the list.

Just as well social media didn't exist in the '60s. And we grew out of it.

Murdoch and Northcliffe and their puppets running shit scared and hysterical. What a glorious sight.

Actually, it's also very useful because it gives a glimpse of how the establishment would react to a Labour landslide. Even if it's only with social democrat policies. You could expect the usual run on sterling and White House/Pentagon/Langley propaganda bullshit - "ten minute" meetings with Corbyn etc., that sort of far right thing.

There are precedents. It's only necessary to consult the public record.

Meanwhile, just take the piss out of the usual far right nutjobs. It helps to ease the impact of "austerity" theft.

It's "misogyny" to oppose a woman MP who you disagree with?

It's "re-education" to expect an MP to support policies which were so popular at the last election (in the face of massive right wing propaganda from within and without the party)?

Sounds a bit 1950s McCarthyite, that. Not unexpected, though.

"and represent the youngsters who back Corbyn and want to create a decent, caring and fair society for their kids and grandparents". "

Be interesting when those youngsters realize he's working to facilitate May's hard Brexit - those votes were lent, not given.

It'll be even more interesting when the establishment realizes the Blair-type betrayal won't work again. Especially after Chilcot again pointed out that Blair was "crooked" - by implication, as in "not straight".

And yet more interesting when those youngsters want to bin a Capitalist EU in favour of a Socialist or even a Social Democratic EU. In which case the votes will stay solid as long as the Labour Party are willing to fight for it, as Nye Bevan pointed out almost seventy years ago.

"It's "misogyny" to oppose a woman MP who you disagree with?"

They weren't disagreeing, the twitter commentators, were they? They were belittling her achievement in increasing her majority while actively campaigning as a new mum, shrugging, sneering and one going so far as to suggest she shouldn't have started a family with an election looming - an election that was a snap call and not due for years. Not a great look but if you want to suggest my words are complaining about valid criticism that can be made, go right ahead.

"It's "re-education" to expect an MP to support policies which were so popular at the last election (in the face of massive right wing propaganda from within and without the party)?"

The policies were popular but face it - it's never been the policies people didn't like, it's him. And don't forget, much of labors vote was an anti-hard brexit protest vote and he's now got the juggling to come. Don't blow it.

It's the way Mr Bentham said it and the grovelling he now expects - it confirms the worst fears of those who are reluctant to vote for him. "Get on board" - sounds like a coach telling the kids to "get with the program".
He's been in the job 2 mins and he's already mouthing off like a micro manager.

MP's aren't mindless robots - you can't big up Corbyn and his voting record and then deny MP's the same level of voting with their conscience.


"Sounds a bit 1950s McCarthyite, that. Not unexpected, though."
Nah, suggesting the way a local official talked, echoed the fears of middle class floating voters and gave ammunition to the opponents of the party I've voted for since the mid 80's is fair comment.

Except he wants to leave and his position is little more than a warmed up version of Johnson's "cake and eat it position".
Those youngsters want their freedom of movement...

Not very good, your responses. Especially since you claim to have voted "Labor" since the 1980s.

"Not very good, your responses. Especially since you claim to have voted "Labor" since the 1980s."

Yeah, so poor that you failed to address or refute any of my points.

Have a good weekend.