Those on the libertarian right will not hear a word said against former Living Marxism stalwart Brendan O’Neill, now of Spiked, so named because it should have been long ago. His knee-jerk whataboutery is held in the highest regard by such people, especially as the targets of his writings are inevitably on the left, and can be painted as part of the mythical “liberal élite”. He is also incapable of doing basic fact checking.

So it was that O’Neill contributed “The anti-tabloid snobs are the real bigots” for the Spectator magazine’s Coffee House blog section. Yes, the received wisdom was that those who read tabloids were bigots, and it was actually the other lot! Note also that the term “snob”, another from the same nastiness library that spawned “luvvies”, is gratuitously inserted, just to make the target of his ire look worse.

O’Neill was discussing the aftermath of the Finsbury Park Mosque attack, and the thought that the attacker might have been influenced by the constant diet of Muslim bashing copy in papers like the Sun and Mail. He dutifully singled out Lily Allen for severely adverse comment, thus bringing his next commission from the Murdoch or Rothermere press closer to reality. And then he targeted Guardian cartoonist Martin Rowson. 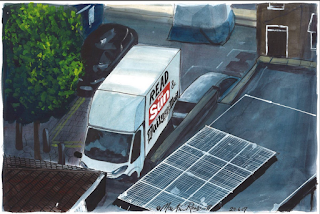 That is where O’Neill went badly wrong, not that you would know from the supreme arrogance of his screed: Rowson was denounced as “cartoonist-in-chief of the bitterest sections of the chattering class”. After the Daily Mail’s legendarily foul mouthed editor Paul Dacre had his meltdown, ranting uncontrollably at the Guardian for publishing Rowson’s cartoon, O’Neill sucked up to the Vagina Monologue, saying of his rant “It isn’t wrong”.

Thus the Spiked man’s next Northcliffe House payday draws ever closer. He confirmed his grovelling before the Rothermere press’ bully-boy in chief by adding “Rowson’s cartoon captured everything that is wrong with the post-Finsbury panic about the tabloids”. Moreover, it “defames everyday newspaper readers”. And there was more.

“It is outrageous to suggest that anyone else, be they Mail journalist or alt-right YouTuber, bears responsibility for the intentional wrongdoing of others. Worse, the implication that tabloid readers are on the cusp of ‘hysteria’, that they’re instructed from on high ‘how to think and feel’, is a rotten libel against the working people who read these papers”. 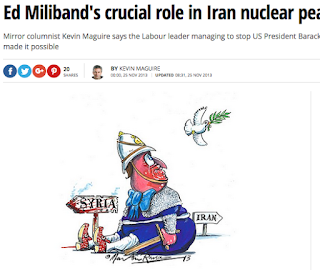 Rowson cartoon in the Mirror, from 2013. Five minutes' Googling

But enough. Those who know Martin Rowson’s work at all well will know that O’Neill has, by this point, put himself in what Spike Milligan would have called A Very Difficult Position. That is because Rowson is not just a contributor to the Guardian. His work also appears at a paper called the Daily Mirror. He is a Mirror contributor of 20 years’ standing.That, Brendan O’Neill, is one of those tabloids you just defended, read by those working people you claimed Rowson had defamed. Thus the elementary lack of research.

The problem writers have in trying to occupy the intellectual high ground, when they can’t be arsed doing the most basic of fact checks, is all too clear. Brendan O’Neill fills his screed with all manner of esoteric hipster asides. He alludes to literary greats of the past. And, for all I know, he ranks as high as any in Rome.

But underneath all the sneering braggadocio, he’s just another dopey meathead who can’t get his facts straight. But he uses lots of big words, so that’s all right, then.
Posted by Tim Fenton at 10:30

I'm sure this is what Martin Rowson would call a 'fur cup' by O'Neill.

"It is outrageous to suggest that anyone else, be they Mail journalist or alt-right YouTuber, bears responsibility for the intentional wrongdoing of others"

Weird, that's the exact opposite of what the right about mosques and terrorists.

"It is outrageous to suggest that anyone else, be they Mail journalist or alt-right YouTuber, bears responsibility for the intentional wrongdoing of others."

This should be remembered the next time he, or any of his colleagues/publications, blame the Muslim community for an Islamist atrocity

What's mildly interesting about this most recent example of tory hypocrisy and panic is their reintroduction of the term "working" in their propaganda.

Alert citizens will be aware that for many years the dominant theme here and in the United States of Amnesia was all about the "Middle Class". The term "Working Class" almost disappeared from mainstream media. It was part of the general propaganda drive to recruit almost everybody into a mythical mass "Middle Class". After all, if you conceded the term "Working Class" even the dumbest Sun or Daily Mail or New York Times reader might start wondering about its definition. Naturally the term "Ruling Class" was, and is, NEVER used for roughly the same reason. "Underclass" made a brief appearance but it was too visceral and disappeared almost immediately.

Cameron and co made brief reference to "hard-working" people but this too was quietly withdrawn when it became obvious that term could hardly be used for bankers, oligarchs and profiteers. It was one of said Cameron's major own goals past Murdoch, Northcliffe and all the other fat goalkeepers trying to hide behind the centre back.

"Class" of course has nothing to do with how much you earn or where you live. It is how you identify yourself. But the chances are if you are an employee you are de facto Working Class......whatever far right propaganda tells you and however much you might delude yourself otherwise. Hence the present tory effort to try yet again to dilute the term to their advantage. And if they can't dilute the term they will fail in their own generations-long class war against workers. This is a serious business.

Thatcher was not the first or last to ask, "Is he/she one of us?" Since then the propaganda assault has intensified to current near-ludicrous levels. Now it is so absurdly diaphanous it was bound to provoke revulsion, let alone a challenge to raw common sense. People exchange independent, spontaneous opinions which accumulate on social media. And there's virtually bugger all the far right establishment can do to stop it - short of openly fascist measures. Old propaganda methods have almost run their course, though there's life in the old sewer rat yet.

All of which may presage a sensible reawakening of the class struggle. We shall see what we shall see. I am willing to bet the Ruling Class is presently shitting itself at the possibility of revived threat to their existence.

Journalists on The Australian where O'Neill has a regular perch loathe the pompous twit. He still won't acknowledge that he is funded on regular trips to Oz to bore people witless, by the creepy IPA "think tank" (funders: R.Murdoch, G.Reinhart & other assorted billionaires) whose policies include the abolition of any state funded media(the ABC), abolition of state pensions, welfare,universal healthcare etc etc.
Libertarian, Marxist? Try flat out rampant Fascist.