Martin Daubney is a former Screws hack who became editor of Lad Mag Loaded. He is also a friend of the deeply unpleasant Milo Yiannopoulos, whose bankability nosedived recently after an apparent paedophilia admission. Daubney, like so many other minor pundits, sets great store by his TV appearances. He has also joined the right-wing press’ crusade against Guardian cartoonist Martin Rowson. 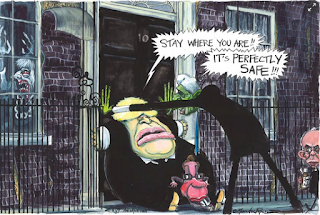 As Zelo Street regulars will recall, Rowson’s cartoon following the Finsbury Park Mosque attack, showing the white van involved and added “Read the Sun and Daily Mail” as a side advert to it, caused the Mail’s legendarily foul mouthed editor Paul Dacre to have a very public meltdown, such was the sensitivity of the nerve that Rowson had touched. 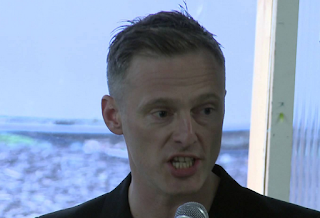 A later Guardian cartoon by the same author depicted the ghost-like figure of Theresa May in 10 Downing Street, with Philip Hammond trying to get through the door, but seeing his way blocked by London’s formerly very occasional Mayor Alexander Boris de Pfeffel Johnson. The symbolism is that of Hammond prevented from taking over as PM by those who have figured out it’s in their interests to keep Ms May in post. 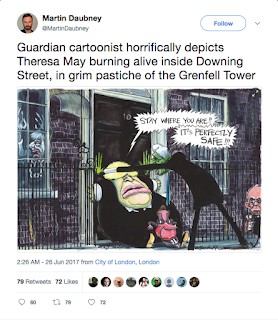 This was not difficult to understand. But for Daubney, it was the summit of intellectual challenge, a summit he spectacularly failed to reach. Hampered by innate prejudice and basic stupidity, he concluded “Guardian cartoonist horrifically depicts Theresa May burning alive inside Downing Street, in grim pastiche of the Grenfell Tower”. 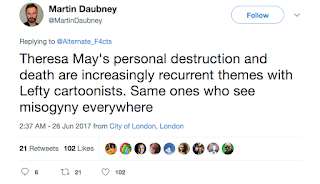 There was more: “Theresa May's personal destruction and death are increasingly recurrent themes with Lefty cartoonists. Same ones who see misogyny everywhere”. Except this was totally untrue. Sadly for Daubney, his Twitter following, rather than telling him gently that he had fouled up, behaved as an echo chamber of prejudice, agreeing that the rotten lefties were a bunch of traitors, the Guardian hardly sold any papers anyway, and it would therefore soon be out of business. 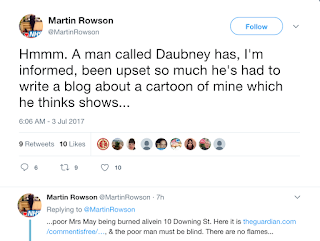 Armed with this fount of not-really-knowledge, Daubney then penned a blogpost for the soon to be terminated right-wing irrelevance that is Heat Street, titled “Why Left-Wing Satire Has Gone Too Far”. This concluded “Apparently the one group in society which it is increasingly safe to dehumanise, taking joy from depictions of their torture and agonising death, is white conservatives”. It was left to Rowson to correct the idiocy. 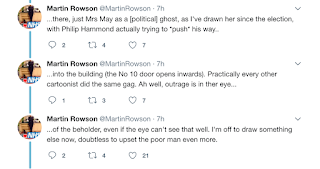 “The poor man must be blind. There are no flames” he pointed out, adding “Practically every other cartoonist did the same gag”. But then, Daubney did not look at those others. He had already picked up the wrong end of the stick and decided to beat about the bush with it. As a result, he has ended up in approximately the same place as Lyndon Johnson’s observation on making a speech about economics.

Yes, Martin Daubney has ended up pissing down his leg. It feels real hot to him, but nobody else seems to notice. Except, of course, those who are now ridiculing him.

Still, he’s on telly, don’t you know? Another right-wing idiot bang to rights.
Posted by Tim Fenton at 10:19

Wasn't it a former Tory Chancellor who called Theresa May a 'dead woman walking'? Did Daubney FEWM about that?

They'll let people like him DAUBNEY shite on blogs...

I don't believe Daubney is a real person.

He's either a hologram, a cartoon or a cardboard cut-out. Like all tories.

The really funny thing is mainstream media (all of which are right wing shite) keep wheeling out wankers like him, presumably because they assume they're believed by anybody with functioning common sense. Naturally the latter excludes regular purchasers of Brit "news"papers and regular watchers/listeners of broadcast "news" and soap operas.

The age of social media has made meffs like Daubney irrelevant to free thinkers who believe in social progress. It just hasn't dawned on said meffs yet - which makes for great humour while it lasts.

Should have gone to Specsavers.