As Zelo Street regulars will know by now, former EDL head man Tommy Robinson takes grave exception to being called racist or bigoted. He calls such terms “lies”, and is prepared to make 300 mile round trips to the North West, with two accomplices in tow, to make his point, although this, he assures anyone who wants to know, is only to have a “polite conversation”. But the Police are unconvinced of his motives. 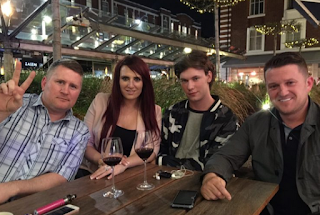 So it was that earlier this week he was arrested in a dawn visit at his home. This was on suspicion of his having committed contempt of court: Tommy and his pet creep Caolan Robertson (the one who holds the microphone, thus making them both look terribly important)  had rocked up at Canterbury Crown Court, wanting to “interview” four males who were on trial accused of raping a 16-year-old girl.

As was explained by the Evening Standard, “Any filming and recording of courts and court precincts is illegal in the UK under section 41 of the Criminal Justice Act 1925 and the Contempt of Court Act”. Robinson and Robertson did not help their cause by making repeated assertions that the men on trial were already guilty.

Now, it seems, they were not the only ones incurring the displeasure of the authorities. Recently, Tommy and his pal Caolan had been building bridges with the leaders of Britain First, which one MP has suggested should be proscribed as a terrorist organisation. They were snapped with Britain First leaders Paul Golding and Jayda Fransen, who, by complete coincidence, also fetched up in Kent this week.

And, as with Tommy Robinson, their latest campaign progressed not necessarily to their advantage: as Kent Live has reported, “Leaders of the radical right wing group Britain First have been arrested in connection with a ‘campaign’ related to an ongoing rape trial at Canterbury Crown Court … Paul Golding, 35, and Jayda Fransen, 31, were detained yesterday (May 10) on suspicion of inciting religious hatred after posting videos on social media. They have been bailed until next month”.

Do go on. “A Kent Police spokesman said: ‘A 35-year-old man and a 31-year-old woman, both from London, have been arrested on suspicion of inciting religious hatred … The arrests are in connection with leaflets and videos posted online that relate to an ongoing trial at Canterbury Crown Court … Both have been released on bail pending further enquiries until Saturday 3 June 2017’ … The arrests were carried out in the Tonbridge area at around 7.15pm on Wednesday 10 May 2017”.

As with Robinson and Robertson, Golding and Ms Fransen are portraying themselves as victims, and suggesting that the Police are biased towards all those Scary Muslims (tm). But the reality is that the Police are there to uphold, and if necessary enforce, the rule of law. The four on trial at Canterbury Crown Court - or anyone else on trial anywhere in Britain - are entitled to a fair trial, and to be considered innocent until proven guilty.

With both Golding and Robinson having what is termed “previous”, it will be interesting to see what transpires at their next court appearances. Meanwhile, Tommy and his side-kick might think twice before arranging another confrontation, sorry, polite conversation.
Posted by Tim Fenton at 10:20

You have to wonder whether their motivation is in fact to sabotage the trial, so that they can whip up their more challenged followers with the narrative that evil rapists were allowed to get away with it on a technicality because they're brown and Moslem.

Say what you like about Tommy Robinson at least he took the trouble to adopt a British name before embarking on a career of forriner bashing.
Ms Fransen, however:
https://exposingbf.wordpress.com/2015/05/15/dear-jayda/

'the radical right wing group Britain First'
Interesting use of the word 'radical' by Kent Live.

Odd you defend moslems who rape our children and mock the people who are exposing the issue.

I do not defend anyone convicted of rape.

Also, what Robinson and his pals in BF are doing is not "exposing the issue".

Those on trial are considered innocent until proven otherwise. Their trial, and if found guilty, punishment, is a matter for the authorities, and not for self publicists and vigilantes.

Will they be knocking on the door of the co founder of the EDL to upset him for his conviction of sex abuse?
I doubt it.
Neither will they be doing a sponsored sympathy walk for the children seen in the abuse images found on the computer of Mr Price.

A Google searches will show how many edl and bnp types have been arrested, charged or convicted of sex crimes.
Is it any wonder some people can't take them seriously?

Most British appear to be quite content with the rape, assault and abuse of their people by those who believe it is their divine right to rape and murder and plunder those who are the enemies of allah, ie, all non muslims. But, alas, the Brits are sleepwalking this one so far, and what is happening to Tommy, is soon coming your way too, but by then, it will be far too late. And the reason: you failed to protect Tommy's right to critisise islam and muslims, and expose the NEGATIVE IMPACT it has on British society.

Tommy Robinson is free to criticise whomsoever he likes.

He is, however, not free to break the law.

There is a difference between these two.

It occurs to me that if people are being arrested and tried for rape, the 'expisure' is already happening...