When Terrorism Is NOT Terrorism

A double fatal stabbing took place in Portland, Oregon two days ago. As the BBC reported, “Two men have died in the US trying to stop a man abusing two women of Muslim appearance, Oregon police say … The abusive man turned on the two men and fatally stabbed them in the city of Portland, police said … Police have identified the suspect as Jeremy Joseph Christian, 35. He has been charged with offences including aggravated murder, attempted murder, intimidation and being a felon in possession of a restricted weapon”. What did the Mail make of this killing? 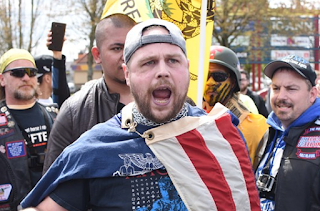 “White supremacist 'kills two Good Samaritans by slitting their throats as they try to defend woman in a hijab after he started yelling anti-Muslim slurs” was their first headline, followed soon after by “Second Portland train stabbing victim was Army veteran father-of-four, 53, who was heading home when he was 'killed by white supremacist for trying to protect Muslim woman in a hijab’”. And where did this happen?

“The attack happened on a MAX train in Portland, Oregon, around 4.30pm Friday … Christian was arrested after he ran off the train at the Hollywood transit station”. MAX stands for Metro Area eXpress, and it’s not what we would call a train service. It’s more like the Manchester Metrolink - a medium distance light rail operation. So the “stations” and trains are pretty much open to anyone; there are no barriers, for instance.

All of which means the attacker did not have to pass any kind of security check before boarding a service. That attacker had posted this on Facebook: “All Zionist Jews, All Christians who do not follow Christ's teaching of Love, Charity, and Forgiveness And All Jihadi Muslims are going to Madagascar or the Ovens/FEMA Camps”. Nice guy, eh? 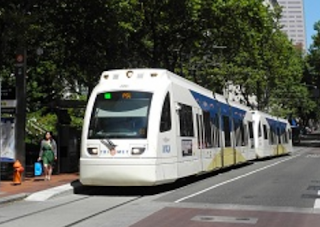 The Mail concedes “The suspected murderer Jeremy Christian is known for hate-speech, and is a self-identified white supremacist who was pictured on April 29 referring to himself as the 'Lizard King' and giving Nazi salutes at a free speech rally with an American Revolutionary War flag tied around his shoulders like a cape”.

Now have a pause and a think about that. Had Jeremy Christian been a follower of The Prophet, and abused two overtly Christian or Jewish women before fatally stabbing two blokes who interceded, he would have been immediately labelled a Terrorist. No matter that he was acting alone - so was the Westminster attacker. 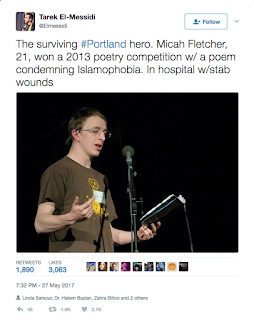 But the Westminster attacker was labelled a terrorist. Far-right pundits lined up to promote their Muslim-bashing narrative, telling us that there had to be controls on such people. Hell, if we’re talking train stabbings, the bloke involved in the Grafing Bahnhof incident wasn’t a Muslim, but that was the way media outlets like the Express framed the story. There was a fatal stabbing, so he became a Muslim and the incident a terrorist one.

Well, now there has been another terrorist incident in the north-western USA. Two men have died and another has been injured. But as there are no Muslims involved, it is not terrorism. Would the press be practising double standards? Perish the thought!
Posted by Tim Fenton at 16:24

Terrorism is not terrorism when mainstream media say so.

It's notjust the yellow press, though.

To the best of my recollection, not one news outlet (print, online, broadcast) described Thomas Mair as a terrorist at any time from his first court appearance to his sentencing hearing. This despite his doing the exact equivalent of some Salafist nut shooting someone whilst shouting "Allahu Akbar!"

The only time the word was used was in the Graun, and even that was put in quotes because it was the word used (quite correctly) by Jo Cox's widower.

It is a given in contemporary discourse that white people can't be 'terrorists' (unless they've convertted to Islam, of course; at which point they become, as it were, 'honorary darkies'). Again, it's not just the media; white racists who are found to have made bombs or to have the wherewithal and the intent to do so hardly ever get charged under all of this 'anti-terrorism' legislation that our pols all have the hots for, and hence get sentences of under 5 years if they're convicted at all. Whereas a Muslim teenager can get 15-20 years for possessing a copy of document which he has downloaded from the internet where it stands in full public view.

Actually if you Google Thomas Mair terrorist many news outlets used the word, probably because the CPS said the murder of Jo Cox was an act of terror.

The Crown Prosecution Service said in a statement: "Mair has offered no explanation for his actions but the prosecution was able to demonstrate that, motivated by hate, his pre-meditated crimes were nothing less than acts of terrorism designed to advance his twisted ideology."

I'd be interested in seeing a brekadown of the number of times the media used the t-word prior to the verdict compared with afterwards (which is the point at which the CPS seems to have used it, according to your quote).

My point was that the media were at best highly reluctant to use the word in connection with a white neo-Nazi which they would have scattered about like confetti for a non-white, Muslim defendant.

The sooner the definition of the word 'Terrorism' extends to what it must, the sooner people can see it goes on a lot more than we realise.
Unfortunately, this involves some authorities tactics and procedures being caught up in the truth..

This is why it hasn't happened. Yet.

It's all rather pointless expecting msm "journalists" to have a conscience in this matter.

What else can you expect from a slimey mob of jobsworth Uriah Creeps?

Would you want your kids to marry one of them? They all look and sound the same to me......