When the Labour Party made its recent decision to ban Simon Danczuk from standing as their candidate in Rochdale next month, part of that process would have been rather like a card game where they could see one or two of the cards ranged against them, but not all. They  knew about the “sexting” of Sophena Houlihan, who was just 17 at the time. They knew about the incident in Algorfa. They knew about lots more. 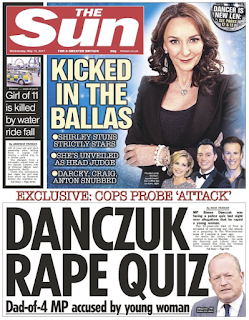 What Labour also knew was that the Murdoch Sun had at least one more story in reserve, the “tell-all” by Spanker’s second wife Karen, which was revealed here on Zelo Street recently. But what they did not know was what the Murdoch goons have plastered all over the Sun’s front page today. “Exclusive … Cops Probe ‘Attack’ … DANCZUK RAPE QUIZ … Dad-of-4 MP accused by young woman” screams the headline.

Quite apart from the fact that Danczuk is no longer an MP, this is no more than an accusation that has been levelled. But that does not stop the Murdoch doggies: “Simon Danczuk was ­facing a police quiz last night over allegations that he raped a young woman. The 50-year-old is accused of carrying out the attack at a property in the Westminster area of London a year ago”. That sounds like his flat in Pimlico.

The report continues “The claims were reported to cops on Monday” but then tells readers “Danczuk … told The Sun: ‘The Metropolitan Police have not been in touch with me about this … I am very intrigued by the timing of it, two days before the ­clo­sure of nominations for the ­parl­iamentary election in Rochdale’”. The Sun then sort of backs him up.

“Danczuk … quit Labour on Monday after party chiefs banned him from the General Election over a sexting scandal … Hours later it was revealed a woman had walked into a Manchester police station to make a complaint about the al­l­eged London sex attack”. Yes, it’s an interesting chain of events, and what is even more interesting is that “it was revealed”. So who caused it to be revealed to the Sun?

We have two potential sources for the Sun story, and readers should note that the woman who complained to Police did so at a location in Manchester. Source one would have been the complainant herself going to the press, which is not unheard of. The alleged incident took place a year ago - was this a press set-up, the trigger for a story held in reserve, like the Kazza tell-all? Meanwhile, there is another possible source.

And that source would have been someone in the Police behaving totally improperly and slipping the story to the press. The late George Michael was told by Rebekah Brooks, no less, that whenever the Sun got wind of anything he’d been up to, it was always the cops who were first with the story - never their hacks or the public.

The relationship between the Police and the press, especially the Murdoch press. Does that ring a bell? It certainly should: that is what Part 2 of the Leveson Inquiry would look into. And this morning we have another reason why it should go ahead.

[UPDATE 1935 hours: the perpetually thirsty Paul Staines and his rabble at the Guido Fawkes blog have "exclusively" told that Simon Danczuk, despite the adverse publicity, will stand as an independent candidate in Rochdale, as I suggested yesterday.

This confirms two things: one, that I was right yesterday, and two, that Danczuk is a Fawkes informant, which most people in and around the Westminster village had known for some time. As well as people as far afield as Crewe. Another fine mess]
Posted by Tim Fenton at 10:40

And he talks about "Corbyn extremists"......

All of which means an attack by Spanker is actually an asset. After all, who except Scum and Volkischer BeoMail readers will believe a word he vomits into the ether?

There would be fewer more hilarious sights than he and Mackenzie being hurried by their scruffy collars into a meeting with Sweet Pants in the Scrubs. Unless they were accompanied by Blair and his gang and the Mugdoch/Dacre goons.