After duly digesting the implications of that cyber attack on the NHS, the thought occurred to the inmates of the Northcliffe House bunker that the skimping on virus and malware protection which contributed to the chaos could be very easily traced back to the very Conservative Government that all those hacks and pundits were working so hard to re-elect. So some kind of diversionary tactic was called for. 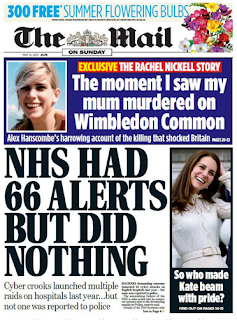 And so it came to pass that today’s Mail on Sunday brought readers a suitably thundering headline: “NHS HAD 66 ALERTS BUT DID NOTHING … Cyber crooks launched multiple raids on hospitals last year … but not one was reported to Police”. What would reporting a cyber security alert to the cops achieve? They can stop real thieves, real vandals, real practitioners of harassment. Does the MoS think they can apprehend malware?

Are Geordie Greig and his pals suggesting that the Police would be able to provide a free-at-the-point-of-use virus check and security patching service? Would the local cop shop have advice on upgrading and/or replacing obsolete hardware and software? Might they dispatch officers to stand guard at the door of the local hospital’s server room in order to dissuade those “cyber crooks”? The entire premise of this argument is bullshit.

Still, on ploughs the MoS, telling readers “Hackers demanding ransoms launched 66 cyber attacks on English hospitals last year - but none was reported to police … The astonishing failure of the NHS to take action laid its computer systems open to the devastating assault on Friday, experts said … Details of the 2016 incidents only emerged during a Mail on Sunday investigation using freedom of information requests”.

Who are these experts? Here’s one: “One expert, Brian Lord, a former GCHQ director, said fear of ‘embarrassment’ may have stopped the trusts coming forward to report the earlier attacks … He said they should have led to hospitals ‘getting their basic security measures up to date’”. He didn’t say the cops should be roped in.

Is there another expert in the house? “Security expert Paul Norris said large networks are particularly at risk as the virus continues to spread”. Nor did he.

But we do know that “Production at Nissan’s Sunderland plant has also affected by the attack, but bosses said there had been ‘no major impact’ on the business … ’Like many organisations our plant was subject to a ransomware attack affecting some of our systems on Friday evening,’ a spokeswoman confirmed”. Is the MoS going to go after them for management failures, and suggest they too should call the cops?

You think I jest? In a Mail on Sunday Comment to back up this article, we are told “While there was money to squander on failed IT systems, and - very possibly - to pay crooks, nobody seems to have found the comparatively small amounts of cash needed to modernise the worn-out and hopelessly insecure Windows XP systems still used by nine out of ten trusts … In short, this is a matter of incompetence, lack of vigilance and skewed priorities, not of money”. And once more I call bullshit.

This has nothing to do with “failed IT systems”, and the small amounts of cash have been denied the NHS by a penny-pinching Government. Don’t let the Tories off the hook.
Posted by Tim Fenton at 10:55

Just one more routine cowardly attack on the NHS by Tory Nazi goons.

Just another step down the road to trying to sell it off to assorted US and European economic mafiosi. It's what Tories do, New Labour was no different.

Anybody who believes a word coming out of that rag or any Brit mainstream media deserves an arse-kicking from now to next weekend.

The amount of cash needed to upgrade NHS IT systems is huge. It's not just a case of replacing a few old computers. There will still need to be upgrading of X Ray machines, CT scanners etc.
The time is fast approaching when organisations like the NHS will have to seriously consider removing themselves from the internet and establishing their own dedicated networks. The only security from internet hackers is not to be on the internet.
And block all ancillaries such as USB sticks.

"Britain’s National Health Service has plainly been carefully targeted by internet highwaymen looking for easy victims. They did not choose the NHS because it was impoverished. On the contrary, they seem to have assumed it was quite likely to submit to their extortionate demands"
It wasn't targeted, but was just one of very many victims attacked due inadequate defences. The scammers made no assumptions about who would be likely to pay up. They just hoped that some victims would.

And line 5 of your article should say "kind".

Anon @ 11.09
'Anybody who believes a word coming out of that rag or any Brit mainstream media'
I recognise your style. But why have you stopped giving your name?

Many of the Tory faithful turned up at the Observer to parrot a similar line: all the fault of managers and pen pushers, no blame attached to ministers.

Any for all Dacre fans - https://www.theguardian.com/media/2017/may/14/is-paul-dacre-most-dangerous-man-in-britain-daily-mail

Whenever the Guardian title is mentioned I am reminded of the rhetorical comic question, "Are you a man or a mouse?......Squeak up, squeak up!"

Yes, it produces the occasional reasonable article. But that is mere window dressing for an outlet going even faster downhill ever since ex-Murdoch employee Viner became editor.

The Guardian is scarce worth a fart in a bottle, especially when it employs right wing deadbeats like Toynbee.