The furore over the Tory manifesto’s social care proposals, which if implemented would see the elderly have their homes sold after their death to pay care bills, with their children getting to inherit very little indeed, shows no sign of going away. And with weekend opinion polls recording a closing of the gap between Labour and the Tories, The Blue Team’s press cheerleaders had to change the subject, and fast. 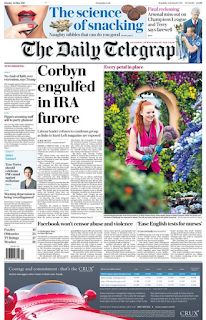 Their new chosen specialised subject would have been Brexit, a trusty staple where readers could be reminded of all those ghastly foreigners being faced down by the might of Empress Theresa. But then came Jeremy Corbyn’s interview by Sophy Ridge on Sky News yesterday morning, where Ms Ridge brought up the subject of Northern Ireland.

Corbyn would have known this was a highly likely line of questioning, as his side-kick John McDonnell would know that he might face prodding on Marxism. There was no ideal answer for Jezza: unequivocal condemnation of the Republican side would lay him open to charges of hypocrisy, and less than unequivocal condemnation of the Republican side would have him, once again, labelled an IRA sympathiser.

And so it came to pass: Ms Ridge wanted to know if Jezza condemned the IRA. He replied “I condemn all the bombing by both the Loyalists and the IRA”. This was enough to have the dead cat duly deployed by the more obedient part of the press. 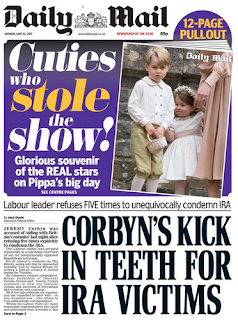 Pride of place has to go to the Telegraph, for inflating this particular soufflé of news well beyond the limits of viability: “Corbyn engulfed in IRA furore … Labour leader refuses to condemn group”. Er, he did condemn them. The Mail was also ready on the hair trigger: “Labour leader refuses FIVE times to unequivocally condemn IRA … CORBYN’S KICK IN TEETH FOR IRA VICTIMS”. The supporting articles were equally condemnatory.

Daily Mail Comment talked of “the twisted Corbyn narrative - peddled by Marxists for years … The thought of this IRA cheerleader becoming Prime Minister is simply grotesque”. The Sun’s editorial, backing up that front page “IRA pal Corbyn blasted” teaser, tells “The hardcore leftie is making the party more out of touch day by day with his immigration policies and IRA ties”. But the Murdoch goons can always be relied upon to foul up. 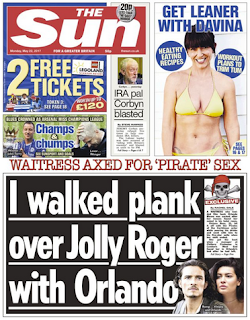 Ranting “He was snapped having coffee with [Gerry] Adams and the late Martin McGuinness in the summer of 2015 - shortly before he became party leader … He also observed a minute’s silence in 1987 for eight IRA members killed by the SAS in an ambush in Gibraltar”, the inmates of the Baby Shard bunker duly sell the pass.

The SAS ambush in Gibraltar resulted in the deaths of THREE IRA members, something the Murdoch press ought to know about. After all, when it was revealed that the three were unarmed, the Sun and Sunday Times went after the ITV documentary Death On The Rock, and were so creative in smearing those involved that they ended up paying most of the £300,000 libel damages awarded to witness Carmen Proetta.

The Murdoch press can’t even get its Corbyn IRA smear right. But good to see the knee-jerk deployment of the dead cat. I’m sure Lynton’s cheque isn’t in the post.
Posted by Tim Fenton at 10:45

Corbyn brings these things on himself due to his childish 'vulgar-leftist' sympathising with horrendously violent and intolerant movements on the grounds they are 'anti-Imperialist'. It's a serious flaw in his understanding of the world, so it's not surprising those who oppose him would seek to exploit it.

You forgot to mention the explosives that were found in a car belonging to one of the IRA members. It wasn't just a case of "three unarmed IRA members shot" as if they were executed out of hand, it was an intelligence operation that went wrong. A bombing of Gibraltar was planned.

The only surprise is that mainstream media Nazi goons didn't vomit this shite earlier.

Shows how desperate they after McDonnell destroyed Damian Spiv in front of msm module Marr.

And yet only one major UK party has an actual ex-IRA terrorist holding office. Step forward Maria Gatland, a Tory councillor of 15 years standing who was an active IRA member in the 1970s and even tried to purchase guns for them, boasting "I agreed with the shooting of British soldiers and believed the more who were killed the better". After her past came to light, she was suspended by the Tories, then allowed back in. She's still serving as a Conservative councillor in Croydon today.