Corbyn On Terror - Press Out Of Touch

The speech given yesterday morning by Labour leader Jeremy Corbyn, where he linked the UK’s adventures abroad - mainly Iraq, but also bombing in Libya and Syria - to the heightened risk of home-grown terrorism, has predictably set the Tories off on the mother of all displays of righteousness. How dare this ghastly socialist chappie tell us that it’s all our fault? Except he didn’t say that, and the public sees it differently. 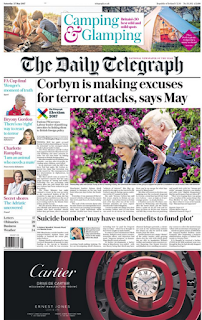 What the Tories have clearly decided to do in response to Corbyn’s speech is to tell anyone who will listen what they say he said, even though it may not actually bear any relation to the Labour leader’s words or meaning. So the increasingly downmarket and desperate Telegraph has told readers “Corbyn is making excuses for terror attacks, says May … Furious PM accuses Labour leader of justifying atrocities by linking them to British foreign policy”. He didn’t say that, either. But you get the drift.

This line of instant condemnation had clearly been handed down from on high, and had some unintentionally hilarious results, such as Michael Fallon being quoted a speech by Channel 4 News host Krishnan Guru-Murthy which the Tories’ dead cat deployer in chief instantly denounced, before being informed it had been made by Boris Johnson.

More reliably for the Tories, the Mail has also weighed in against Jezza, claiming “Theresa May lashed out at Jeremy Corbyn tonight for making 'excuses' for terrorists after he linked UK foreign policy to the Manchester bombing … The Prime Minister accused the Labour leader of saying terror attacks are 'our own fault' and condemned him for delivering the controversial speech just four days after the atrocity”.

And there was bad news for the Tories and their cheerleaders: they are significantly out of touch with public opinion on this issue. YouGov yesterday asked this question: “In a speech today, Jeremy Corbyn will address ‘the connections between wars our Government has supported or fought in other countries and terrorism here at home’. Do you believe that wars that the UK has supported or fought are or are not in part responsible for terror attacks against the UK?”

The response was to show 53% of those expressing an opinion agreed that those wars had, at least in part, been responsible for terror attacks against the UK, with 24% disagreeing. 23% of respondents did not express an opinion either way.

So by a majority of more than two to one, the public appears to side with Corbyn, not Theresa May. And then doubling down by saying Jezza said something he didn’t will only increase voter distrust and cynicism - but only towards the Tories.

The imperial progress of the great Empress Theresa isn’t going too well. I wonder why.
Posted by Tim Fenton at 12:46

Given the far right ownership of Brit mainstream media, it took a lot of courage for Corbyn to make that speech. Little Englander tories were bound to respond the way they did. More praise, then, for Guru-Murthy rather neat entrapment of deadface hypocritical conman Fallon.

The poll response is another tiny indication that maybe, just maybe, this country is beginning to wake up from the nightmare of the last 38 years.

It might be a cliché, but the first step to solving a problem really is acknowledging there IS a problem.

In Britain's case that problem lies in Parliament and the invisible men who manufactured the problem. The very last thing we need is more of the same from the likes of sour-faced May and all the other conmen and women.

It's not just the right wing press.
I was dismayed to see today's i letters page pose the following -
"Was Corbyn right to blame the UKs action in Middle East for bombing?"

I didn't see it as Krishnan Guru-Murthy (KGM) 'hi-jacking' Micael Fallon. KGM made it clear very early on in that quote that it was from Boris Johnson. Fallon blundered on without listening. Showed himself & his party up even more in my humble opinion.