After details of That Downing Street Dinner were leaked to a German newspaper, in what was rather obviously a wake-up call to Theresa May and her team to start taking the business of Brexit seriously, there was a period of silence from Downing Street. Then came the deployment of the nuclear option: the mythical bogeyman “Brussels” was accused of interfering in the UK’s General Election. 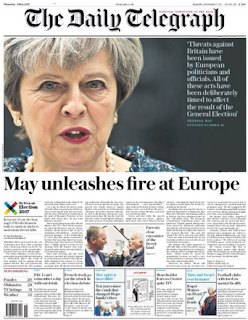 Quite apart from the same UK Government having triggered Article 50 of the Lisbon Treaty, and Ms May having called the election of her own volition, this idea was a complete pack of lies. But that hadn’t deterred her in the past (remember “I am not making this up”, when she most certainly was?), and it did not this time. Moreover, our free and fearless press was prepared to retell, spin and otherwise magnify the lie. 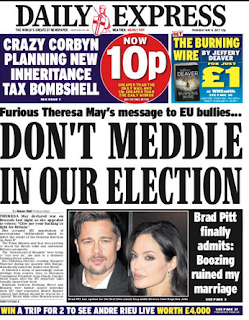 The litany of grovelling and unquestioning papers should shame anyone who works in this industry; instead, it has only served to heighten the feeding frenzy. This was exemplified by the supine and desperate Telegraph, which quoted Ms May verbatim, and confirmed that we were at war with those ghastly foreigners: “May unleashes fire at Europe”. 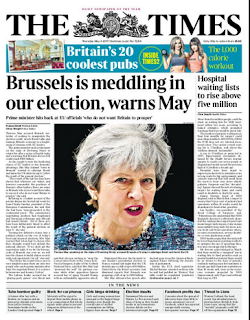 Over at the equally desperate Express, the new and also untrue angle of bullying was added to the mix. “Furious Theresa May’s message to EU bullies … DON’T MEDDLE IN OUR ELECTION”. As they’re not meddling, it won’t take much to stop it. The Murdoch Times is also on board, telling readers “Brussels is meddling in our election, says May”. 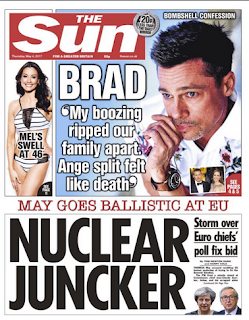 But it is the Sun and Mail where the biscuit is taken in no style at all, with the inmates of the Baby Shard bunker howling “May Goes Ballistic At EU … NUCLEAR JUNCKER (geddit?!?) … Storm over Euro chiefs’ poll fix bid”. Yes, there too, war has somehow been declared. And the Mail was worse. Hysterically, sycophantly worse. 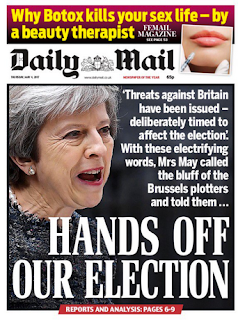 “‘Threats against Britain have been issued - deliberately timed to affect the election’. With these electrifying words, Mrs May called the bluff of the Brussels plotters and told them … HANDS OFF OUR ELECTION”. They never had their hands on it in the first place.

It was delusional claptrap. And the press lapped it up as if it were the very wisdom of Solomon. The gulf between the right-wing press and those observing the PM’s rant as it unfolded could not have been greater, with Kevin Maguire of the Mirror concluding “Theresa May posturing as a war leader fighting the rest of Europe. She's lost it”. 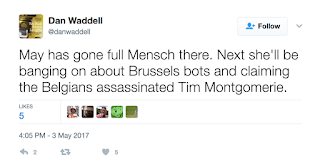 Ian Dunt was even less impressed: “I am honestly not sure I have ever seen a more irresponsible comment by a British prime minister”. Owen Jones, with or without his cat, observed “That wasn't Winston Churchill. That was David Icke” and Dan Waddell summed up the surreal mood with “May has gone full Mensch there. Next she'll be banging on about Brussels bots and claiming the Belgians assassinated Tim Montgomerie”.

That would have the effect of explaining why Monty makes so little sense. But what Theresa May did yesterday was no laughing matter. We have to do business with those she has so dishonestly trashed after the election. And there are limits to her using her press pals to blame someone else for her own inadequacy.
Posted by Tim Fenton at 13:14

Ignore Trump for supporting Brexit constantly referring to Brexit - check!
Ignore Farage for being a total hypocrite and directly intervening in the 2016 US election by campaigning for Trump - check!

And aside from the Times, which takes a slightly more middle of the road option, all of them taking the position that rather than this being May's opinion, the meddling and bullying is actually fact. Joy.

You forgot that foreign non domiciled megalomaniac media owner who continually interferes in UK politics who our beloved PM made sure she saw in New York whilst visiting the Trumpleton. Representation without the need to pay tax.

But then he has troubles of his own at the moment. Not least a POTUS he has supported suffering from dementia and apparently about to be indicted. Hah!

She really doesn't have any policies for this election, does she.

I'm no fan of May's Brexit stance but people are seriously delusional if they DON'T think the EU elite is meddling in the election! They are professional politicians with explicit agendas to pursue, of course they will use what opportunities they have available. The problem May has is to make the opportunism work for her more than it does for the eurotrash or her domestic opponents which is tricky given the rabid feckwittery of sections of the UK press (and left wing commentariat like Owen Jones should beware May doing the 'hard' routine will probably play well with those inclined to vote for her, and those who cringe at it aren't going to vote for her anyway).