After a draft copy of Labour’s General Election manifesto was leaked to a wide range of media outlets earlier this week, the controversy started. Was it costed? Was it credible? Was it centrist, or should hacks just go the whole hog and wave the spectre of leftism at their readers? For those toiling in the service of the legendarily foul mouthed Paul Dacre at the Daily Mail, there could be no doubt. The manifesto had to be rubbished. 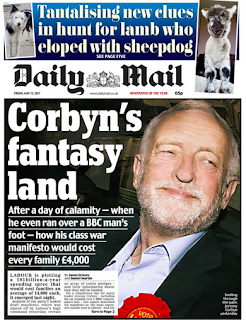 So it came to pass that all those loyal Daily Mail readers were presented with the customary shrieking headline. “Corbyn’s fantasy land … After a day of calamity - when he even ran over a BBC man’s foot - how his manifesto would cost every family £4,000” is the claim. That Jezza didn’t personally run over anyone, and that the Dacre doggies had no room to talk about fantasy with “lamb eloped with sheepdog”, is not mentioned.

But let’s give the story a hearing, and especially that £4,000 claim. It’s a very round number, so whose word have the inmates of the Northcliffe House bunker been taking as gospel in order to prop it up? Ah well. This is where the Mail’s story unravels in very short order: one of their two principal sources is, to no surprise at all, the Tory Party. Yes, the Tories get to slag off their opponents for free, thanks to Paul Dacre.

You think I jest? Under the heading “£93billion: Staggering cost of his pledges”, readers are told “Here Policy Editor DANIEL MARTIN considers the potential costs and reveals they could reach £93 billion a year”. Note use of the all-important “could”.

That much is bad enough, but the Mail has tried to add some credibility to their highly suspect analysis by roping in one of those think tanks. This might seem a good idea on the face of it, except that the think tank in question is the Institute of Economic Affairs (IEA).

So here we go again. Renationalising the Royal Mail? “The Institute for [sic] Economic Affairs said”. Higher and further education? “The IEA said both pledges add up to”. Pensions? “The IEA said this could cost”. Abolishing the Bedroom Tax? “The IEA estimates that these measures would cost”. Why, then, is the IEA a suspect source?

Ah well. Here on Zelo Street we know all about the reliability of the IEA’s analyses - or the lack of it. Their creative recalculation of what the HS2 project would cost was a case in point: taking the official numbers, adding as many other projects as could be found on the flimsiest of pretexts, add a few more billions for something they dreamed up along the way, and then squeal long and loud when they got rumbled.

Anyone needing to know just how economically illiterate and ideologically bankrupt the IEA really is need look no further than my demolition of their two most significant anti-HS2 interventions. And the Daily Mail cites these clowns as an authoritative source.

We know the Mail wants its readers to vote Tory. But this is just desperate.
Posted by Tim Fenton at 13:04

Ah the IEA, that paragon of transparency: -

The speculative costs of a possible Corbyn govt are far outweighed by the astronomical costs of Brexit which, unlike the former will not benefit the country one iota.

It's all Putin's fault. Didn't you Know?

Must be true because MI6 and the CIA say so. And they've NEVER lied to anybody...Have they?

Labour are providing detailed policy plans that allow scrutiny. The Tories are just announcing broad ideas and vague promises that they won't keep, but with nothing to really analyse. Where are the complaints about lack of detail or credibility?