The Murdoch goons at the Super Soaraway Currant Bun have reacted indignantly to the suggestion that they in any way tried to link the Manchester bombing to their since debunked claims that Labour leader Jeremy Corbyn’s was an enthusiastic supporter of the Provisional IRA during the 1980s. Not only that, the inmates of the Baby Shard bunker have declared their “utmost contempt” for what they have labelled “false stories”. 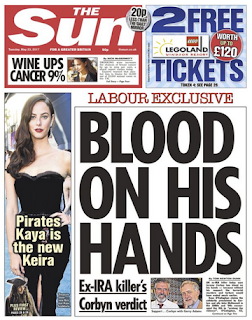 As Press Gazette has told, “The paper’s front page carried an interview with ex IRA member Sean O’Callaghan on Tuesday, which hit out at the Labour leader’s alleged solidarity with the Irish terrorist group under the headline: ‘Blood on his hands’ [but] The Sun’s first edition, which carried the Corbyn story, went to print at 10pm, half-an-hour before the bomb attack at Manchester Arena that killed killed 22 and injured 59, including children … A second edition was put out shortly after which covered the atrocity”.

A Murdoch spokesperson added “The Sun is very keen to clear up any confusion about the timings of its editions on Tuesday, 23 May, and has the utmost contempt for those knowingly exploiting this confusion to suit their own prejudices against the newspaper … The Sun stands as one with the whole of Manchester and our hearts go out to all affected by this tragedy”. Methinks that someone protests too much. I will explain.

One, nobody is denying that the first edition of the Sun, which carried the “BLOOD ON HIS HANDS” headline, went to print before the bombing - Zelo Street acknowledged this last week. However, and here we encounter a significantly sized however, that edition would still have ended up on tens of thousands of breakfast tables the following morning.

Two, that much would have been merely unfortunate, but the original story, with the same “BLOOD ON HIS HANDS” headline, was put up on the Sun’s website AND IS STILL THERE AS I TYPE (0940 hours today). The Murdoch goons know all too well that more and more of their readers get their news from that website. 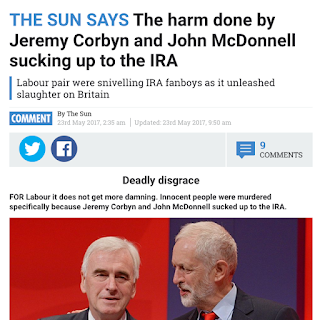 And three, four hours AFTER the bombing, when it would have been apparent to anyone in the Baby Shard bunker what had happened in Manchester, the Sun’s website had the supporting Sun Says editorial committed to it - 0235 hours last Tuesday morning. This incendiary rant, which calls Corbyn and shadow chancellor John McDonnall “snivelling IRA fanboys”, is, like the story it supports, STILL LIVE ON THE SUN WEBSITE.

As the Sun’s faithful Murdoch retainer Trevor Kavanagh likes to say, when that Sun Says editorial was committed to the paper’s website four hours after the Manchester bombing, and both that item and the original story, with its original headline, were left there for MORE THAN A WEEK, They Knew Exactly What They Were Doing.

While the Murdoch goons protest that they’ve been terribly misrepresented by the rotten lefties, they can then go and have a quiet snigger around the water cooler at the knowledge that their propaganda by implication is still out there, and it’s Job Done.

The Sun is a lame excuse for a newspaper. Once again - Don’t Buy The Sun.
Posted by Tim Fenton at 10:02

The problem of course is that in terms of affect real events, the Home Office under Theresa May appears to have actually given material assistance to radicals:

I'd have once been surprised not to see this story picked up - no longer.

It might take some time yet - but just imagine the joy when Murdoch decides (as he always does) these shite hawks are dispensable because they aren't making him enough money.

There will be street parties everywhere outside the East End of London when the Sun closes. They'll be exceeded only by dancing in the streets when Murdoch and his brats shuffle off this mortal coil.

The Sun crew worried about anyone giving them a bad name.

Every time the Corbyn/IRA nonsense is aired yet again by the right wing press, could we have a bit more about the fact that there is a currently serving Conservative councillor in Croydon, who was once an active member of the IRA? Can't imagine we wouldn't have heard a bit about this if she had been a Labour councillor.
http://evolvepolitics.com/realise-current-conservative-politician-literally-member-ira-right/