The so-called Taxpayers’ Alliance (TPA) has convinced itself that thousands of pub closures can be attributed to the level of beer duty. As I pointed out yesterday, this argument fails to explain why supermarkets and off-licence chains are doing a roaring trade in the stuff, despite having to pay that same duty. It also fails to explain the use of pub sites as property chips. I will explain. 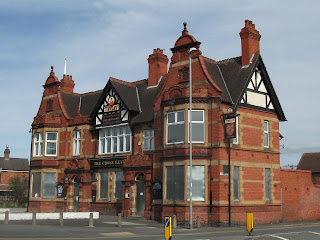 This is the Cross Keys in Crewe. A large roadhouse pub at the west end of Remer Street, it was trading as usual when the manager was told it was to close. This was news to him: as far as he was concerned, it was a going concern and not in any difficulties. But the pub was owned by a PubCo, they had been made an offer for the site, this was accepted, so out he went and it closed.

The Cross Keys had the misfortune to be situated at the corner of an area of land which had housing at the periphery, but a large undeveloped space within. That undeveloped space had been purchased for new housing. The developers needed a way of getting an access road into the site. So they bought the Cross Keys: this gave them a way in. Stuff those pesky regulars.

Roadhouse pubs are particularly vulnerable to being picked off in this way: they are by definition stand-alone buildings with a large footprint, usually with a large car park (which makes the site yet more attractive to developers), and so, unlike pubs that are part of a terrace or parade of shops, there is little of that collateral damage when the wrecking ball fetches up and the fun starts.

And the PubCos, being remote from the communities concerned, don’t care about the site except inasmuch as it produces the best bang for their buck. So you should not be surprised that the Cross Keys is not the only roadhouse pub in Crewe to become a pawn in the chess game of redevelopment. There was also The Earl on Nantwich Road (note past tense).

The Earl was trading normally when the management discovered that it was earmarked for redevelopment as a supermarket. As with the Cross Keys, this was news to them (the regulars weren’t too taken with the idea, either). The pub was duly closed, and after an interval when it stood there and gently decomposed, the demolition teams moved in and converted it into a pile of scrap bricks in short order.

PubCos also subject their managers to a tie system, so they can’t sell what they want, being forced to buy from a set range at whatever price is demanded. So Crewe’s only microbrewery Offbeat has no regular outlet for its product in the town (except its own open evenings), despite being able to sell everything it brews. Why does the TPA ignore PubCos? Simples. They’re potential donors to the cause.

What Matthew Sinclair will not tell you. Because he’s a stinking hypocrite.
Posted by Tim Fenton at 13:06

From the headline thought this was going to be about Staines and Cole again. Still, another fine mess.