As South Africa comes to terms with the shooting incident yesterday that left model Reeva Steenkamp dead and her partner Oscar Pistorius, Paralympic and Olympic athlete, on a murder charge, there has been a ferocious dust-up over the behaviour of Rupe’s downmarket troops at the Sun, who have used the affair as an excuse to splash fashion photos of Ms Steenkamp over today’s paper. 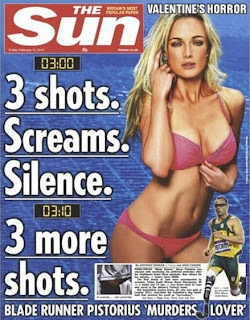 And the Sun has not exactly been restrained over its picture selection, with the model posing in a bikini adorning the front page. It’s clearly not to everyone’s taste to use photos like that to illustrate a story that is currently being treated as a domestic murder, but then, taste and decency usually take a back seat to raking in the dosh at the title, so no-one should be surprised.

What is also questionable is the trawling of other athletes’ Twitter feeds for opinions, which are then inserted into the copy as if the quotes have been freely volunteered to the paper, which they have not. But, as more and more folks are finding out, if you Tweet something on an open feed, you can have no complaints when overworked hacks lift it to spice up their stories.

So there was no quote from Jessica Ennis, whose one Tweet on the shooting gets two mentions (she’s popular, and her name helps sell papers, so that, too, is predictable). Nor was there a quote from Olympic champion Denise Lewis, who also sent out a single Tweet. And there wasn’t a quote from Kelly Holmes either, but she was a double Olympic gold winner, and is also popular.

And there is something else about this Twitter trawl that is odd: no male athletes are quoted, and none from Pistorius’ own country. Why not? South Africans are more likely to have known him, as are male Olympians and Paralympians. But there was no quote from (for instance) Alan Oliveira, Pistorius’ rival from Brazil (another country that has a high murder rate).

Instead, the Sun has fixed on a singularly creepy women-only scouring of Twitter, which makes their front page (characterised by Helen Lewis at the Staggers as “Roll up to ogle the recently deceased!” and – in true Murdoch spirit, this one – “Look at the tits on the dead woman!”) all the more leery and voyeuristic. And the “you don’t have to buy it or look” excuse is not good enough.

That line did not serve when the Sun maliciously fitted up Elton John with a phony “rent boys” story. And it certainly cut no ice on Merseyside with “The Truth” (the paper is still persona non grata in much of the region). The front page may appeal to a few of the antediluvian “lads” brigade, but otherwise suggests that Dominic Mohan is losing touch with decency the same way as Kelvin McFilth did.

But as long as it sells papers, Murdoch will employ him. No change there, then.
Posted by Tim Fenton at 12:54