Pope Resigns – The Reason Why

Moving right along from the Tony Blair jokes, and the more realistic speculation on a successor, the main reaction this morning to the announcement by Pope Benedict XVI that he is to stand down at the end of the month has been a mixture of disbelief that a serving Pope can do that – given the last to do so was in 1415 – and surprise that he should even consider the action. 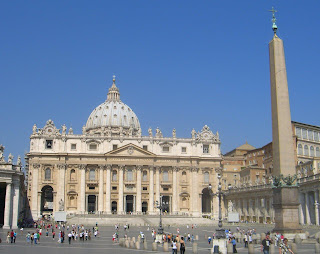 After all, his predecessor didn’t quit, and neither did any of the others in the modern age. Why should the former Roland Ratzinger be any different? Ah well. That predecessor – John Paul II – is key to the whole business. Before he became Pope back in 1978, the office was held by Italians who travelled little, and enjoyed a relatively low public profile.

Only after the former Karol Wojtyla became Pope did the papacy become known for its mission to reach out to other parts of Christianity and other religions, which often involved a serious amount of travel. John Paul II visited 129 countries during his tenure. He beatified more individuals, and canonised more saints, than all his predecessors going back five centuries.

That meant an often punishing schedule, which ultimately John Paul II was clearly unable to accommodate. Yet he hung on, first being unable to kneel and kiss the ground when arriving in a new country, then being unable to walk unaided, and ultimately losing the ability to lead prayers. His iron determination made him try, but age and frailty got the better of him.

This was not lost on the current pontiff, who was very close to John Paul II. And Benedict XVI must have known that, after taking on the papacy at the advanced age of 78, he too would before long reach the age at which his friend had passed. It seems that he has decided that he does not want to hang on to the end, perhaps fearing the inertia that may result.

So Benedict XVI has reached the age of 85, realised that he cannot meet the increasing demands that the modern papacy places on its incumbent, and has been brutally honest with himself and his colleagues in the Vatican. He may well have also judged that there are younger men who could discharge those duties equally well. And that’s why he’s going.

It is a surprise, but only, again, because his predecessor hung on, very publicly, to the end. That is clearly not what Benedict XVI wants for himself and his followers.
Posted by Tim Fenton at 12:59

If that's the case, then little in his papacy became him like the leaving of it.

Benjamin Fulford...blogger and former journalist for Forbes Magazine, has been predicting that this pope would resign for over a year now...he has a substantially different take on the matter.