This blog yields to no one in its advocacy of an occasional visit to the pub for a jar of decent quality beer. Not for nothing did I trek round every pub in Crewe last summer to compile the Crewe Beer Blog survey (still occasionally updated, folks, and correct as far as is known). But a new campaign targeting beer duty will not be getting my signature, nor my endorsement. 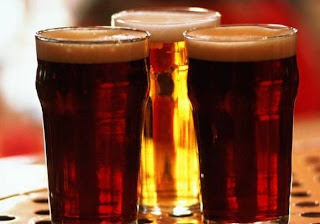 The reason for this is straightforward: Zelo Street also casts a sceptical eye over the dubiously crafted output of the so-called Taxpayers’ Alliance (TPA), that Astroturf lobby group which fraudulently claims to represent this country’s taxpayers, which it does not (the TPA actually represents less than one tenth of one per cent of them). And the TPA is behind the beer duty campaign.

So who else is on board? Some kudos is due to the TPA for getting the Super Soaraway Currant Bun to join the exercise, with Rupe’s downmarket troops doing a photo shoot at the Westminster Arms, though I doubt the Page 3 models sampled the Master Brew Bitter or Spitfire. Anyhow, discreet MPs and hacks go to the Buckingham Arms on Petty France (the beer’s better, too).

But, as Full Fact has pointed out – and they’ve cast a sceptical eye over a previous Sun beer duty campaign – the evidence behind the claim that taxation levels are at fault for the number of pub closures is not persuasive, and far less conclusive. If there was a connection, supermarkets would not have shelf upon shelf dedicated to the stuff (which they do).

What is rather more likely is that less folks are drinking beer, and especially the mass-produced brewery conditioned variety (ie canned, keg and nitro-keg). Sales of cask conditioned beer are either holding up or increasing slightly. The cheapest watering holes in Crewe are not necessarily the most popular. They’re not the best places to have a scoop, either.

What is worse, the Campaign for Real Ale (CAMRA) has joined the campaign: perhaps its executive does not know where the TPA is coming from. Here I can be of assistance: they’re into abolishing the minimum wage, lowering the poverty line, abolishing the NHS and the BBC, trashing local bus services, and demonising the disabled, while wanting tax cuts for their rich backers.

Whereas having a pint or two down the pub is something undertaken by ordinary working people, many of whom will be in receipt of the minimum wage and tax credits, both of which the TPA is against. The overwhelming majority will use NHS services. They may watch a variety of broadcast media, but will watch and trust the BBC the most. And they are more likely to use public transport.

So they would be best advised leaving this campaign well alone.
Posted by Tim Fenton at 17:28