Chris Rennard was a full-time campaigner for the Liberal Party, and later the Liberal Democrats, for around 30 years. He effectively taught the Lib Dems the art of winning by-elections and targeting seats in General Elections: under his auspices, the party went from 18 seats before the 1997 election to 62 after the contest in 2005. He left his role in 2009. 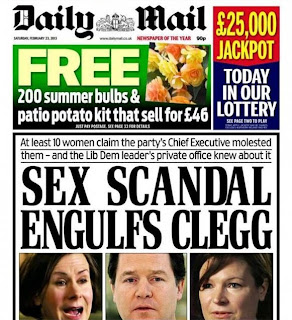 Proportionality be buggered, in other words

During the past week, Channel 4 News – note that the investigative journalism is once more being performed not by the papers, but the broadcast media – has aired allegations that Rennard was, to put it directly, an unreconstructed sex pest. He has strenuously denied those allegations. This has made not one jot of difference: the Fourth Estate has already found him guilty.

This should be contrasted with the pleas from former Screws executive Neil “Wolfman” Wallis, which I covered yesterday, that those arrested should not be immediately considered to be guilty, and that there should be a sense of proportionality. None has been shown by the press towards Rennard, despite no arrest or formal charge being laid against him.

Indeed, such has been the stampede of hacks, pundits and political opponents – Tories and Labour alike detest the Lib Dems – that the Rennard affair has moved swiftly beyond instant guilt to its exploitation as a means of furthering the agendas of editors and parties. For the Daily Mail’s legendarily foul mouthed editor, the goal is to smear Corporal Clegg as punishment for backing Leveson.

So today’s Mail thunders “Sex Scandal Engulfs Clegg”. See, Neil Wallis? Not much proportionality there. Allegations have been transformed into certainty, as have suggestions of Clegg’s knowledge. The Lib Dem leader, it is said, “wants to impose statutory regulation on a British press that has been free for 300 years”. And he must have known, because, well, he must have known. 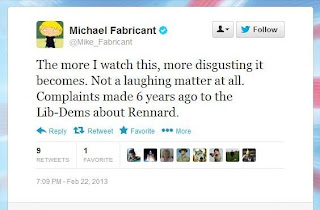 Fabricant is backed up by Tim Montgomerie at ConHome, and note that the LibDems – the Tories’ coalition partners – are consigned to “Left Watch”. Monty, like the Mail, has gone beyond calling Rennard as guilty in his attempt to exploit the story to the Blue Team’s advantage. Meanwhile, that Rennard’s party has set up an investigation hardly gets a mention.

Isn’t it strange how the rules change when the boot is on the other foot, Neil?
Posted by Tim Fenton at 14:15