Mail On Sunday – Pants On Fire

Any claim that the Mail On Sunday, as it has a different editor and title to its weekday counterpart, is of independent mind were today shown to be complete bunk as the paper followed yesterday’s lead, dictated by the legendarily foul mouthed Paul Dacre, of creatively reinterpreting the allegations against Chris Rennard in order to inflict maximum damage on the Lib Dems. 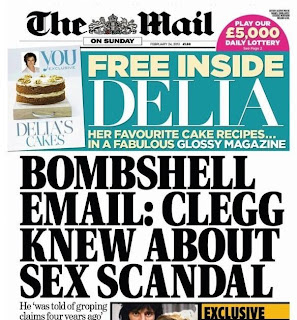 The headline is unequivocal: “Bombshell Email: Clegg Knew About Sex Scandal”. We should not be surprised: this is, after all, the newspaper group that sank to alleging that the Lib Dem leader had indulged in a “Nazi Slur” at the time of the last General Election. Note also that “He ‘was told of groping claims four years ago’” has had the tell-tale quotation marks applied.

So let’s see just whether the MoS tale stacks up. First off, that “Bombshell Email”. So there’s an email, is there? But you know the answer: no there isn’t. We’re talking about a comment made in an exchange on Facebook. The MoS describes the comment as being “sent via the social networking site’s private messaging service”. Either it wasn’t private or someone has been hacking, unless it was volunteered.

What does the comment tell us? Well, here it is: “I just don’t know how Nick can know and not do anything... :-(  makes me very sad”. So someone is assuming that Clegg knew something about something. And that, folks, is all that the MoS has. The rest of today’s story recycles previously published material, together with a new angle which involves kicking the BBC (no surprise there, then).

This is backed up with Mail On Sunday Comment demanding “So what DID you know, Mr Clegg?”, which contradicts the paper’s own headline, as this asserts that there is no doubt what he knew. There is also a side-splitting comment piece by Mark Littlewood declaring “We Lib Dems need honesty - most obviously from Nick Clegg himself”. Very good, Mark, we certainly do need honesty.

And that honesty could include telling the MoS’ readers that you have a berth at Conservative Home, that your day job is at the right-wing Astroturf lobby group the Institute of Economic Affairs, that your definition of liberalism is not the same as the Lib Dems’, and that you’re an embittered floor-crosser (Vince Cable’s term was “right wing ideologue”). Quit wasting everyone’s time and shove off. 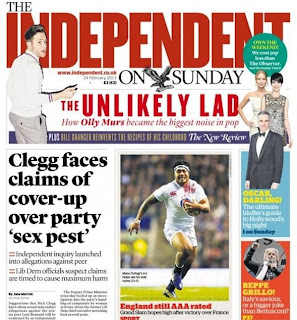 Meanwhile, a look at the Indy On Sunday shows a more accurate account of the Rennard saga: “Clegg faces claims of cover-up over party ‘sex pest’” is the headline, with the telling sub-heading “Lib Dem officials suspect claims are timed to cause maximum harm”. Got it in one: Paul Dacre is telling Clegg that if he makes any more fuss about press regulation, he’ll make sure he loses a few by-elections.

He’ll do that whatever it takes, and honesty be damned. No change there, then.
Posted by Tim Fenton at 11:14