EasyJet – No Problem In Prague

Newspapers know what makes their readers sit up and take notice. And nothing brings the punters bolt upright more rapidly than a good air travel horror story. Moreover, most of those readers know so little about the subject that they are easy to frighten, as has been demonstrated today by the obedient hackery of the legendarily foul mouthed Paul Dacre at the Mail. 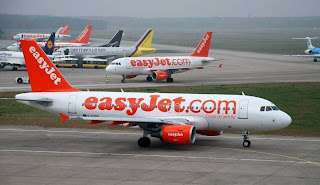 An EasyJet Airbus A319

Which airlines are frequented the most by occasional flyers? Charter carriers and the low-costs. So when the Mail found a “serious incident” involving EasyJet in the Air Accidents Investigations Branch (AAIB) February “bulletin reports”, this was swiftly inflated into “UK-bound EasyJet flight carrying 149 passengers narrowly avoided disaster”. That’ll get the readers’ attention.

But it will surprise no-one to know that, although the AAIB has called a miscalculation of the available runway length a “serious incident”, such is the capability of modern jet aircraft that the danger was rather less than Olivia Williams’ article suggests. And the incident, at Prague Airport, happened back in July last year. I will explain.

The aircraft, a recent model Airbus A319, had arrived at Prague using a different runway to that which would then be used for subsequent take-off. So the flight deck did not see that the latter was being worked on at its far end, reducing the available take-off length. There were distractions faced by the crew, including having charts for both the full and shortened runway lengths open and to hand.

So during the take-off run, that crew discovered that there was less runway available than they had at first thought. There had been a Notice to Airmen (NOTAM), they had read it, but had forgotten about it. However, and in these cases there is inevitably a however, the available runway length was still 2,500 metres. So “The aircraft rotated and became airborne at the planned speeds”.

That means no evasive or exceptional action needed to be taken. Why so? Well, for an A319 on a short haul flight to need more than 2,500 metres to get off the deck would be truly exceptional. And EasyJet routinely fly in and out of airports with rather less than that available: Liverpool (2,285 metres), Luton (2,160 metres), and Bristol (2,011 metres), for instance.

All that happened at Prague last July was that the margin of safety was less than considered satisfactory. There will be recommendations to operators and aircrew intended to prevent a recurrence. Not for nothing was 2012 air travel’s safest year since World War 2. And the UK’s rail network notched up five years without a passenger accident fatality. Yet the scare stories keep coming.

Something to do with letting someone else drive. Irrational fear sells papers.
Posted by Tim Fenton at 10:18

And for the dummies who read the DM, (or at least the few who get past the headline as they look for pics of bikini bodies and celebrity nipples) the fact that this happened in Prague would be a bonus - feckless Poles coming over here and taking our jobs and can't even organise an airport.

Any having stoked up needless anxiety,they report it .http://www.dailymail.co.uk/news/article-2278382/Why-blasting-space-shuttle-safer-walking.html
"Studies show that around 40 per cent of people suffer from a degree of anxiety about flying"