You have to hand it to the Telegraph’s Christopher Booker. He is so obsessed with the EU that there are no ends he will not go to to pretend that something that happens in one or two member states is part of a vast conspiracy that causes all laws to be handed down from that well-known marauding spaceship otherwise known as Brussels. 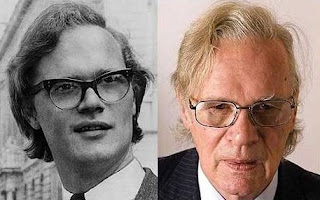 Not improving over the years

Booker’s latest attempt to see the hand of the EU behind every conceivable piece of legislation concerns same-sex marriage (SSM). He tells that there has not just been argument about SSM legislation in the UK, but also in France: “why, just as it was provoking the biggest Tory rebellion in decades, was it also prompting a similar row in the French National Assembly?” he queries.

The straightforward answer is that it wasn’t: the French had voted on it, approving the measure by 249 to 97, the previous week. But this does not deter Booker, who asserts that all EU member states are going to have to fall into line by the middle of 2013, which would be interesting to see, because there is no way that this is going to happen: there won’t even be a majority by that time.

Belgium, Denmark, the Netherlands, Portugal, Spain and Sweden have passed SSM law previously. The UK and France are passing it. Finland and Luxembourg may also do so in the near future. That makes just ten member states out of 27, and as eagle-eyed Euro watchers may have already noticed, the ten do not include Germany (or Italy, or any of the former Warsaw Pact countries).

Moreover, Booker keeps on citing the Council of Europe (CoE), but this body is totally separate from the EU, and is unable to make law. But he includes a CoE measure to “combat discrimination on grounds of sexual orientation or gender identity” as part of his chain of supposed proof. Then the ECHR is asserted to be ready to make SSM a “human right”. If everyone passes legislation, that is.

But not every member state of either the CoE, or the EU, has done so. So Booker’s talk of “shadowy bodies” allegedly “ruling our lives” is more of his obsessional drivel speak. When he pleads “why weren’t we told more honestly and openly why it has all happened?”, the answer is that it hasn’t happened the way he says, his analysis is full of logic leaps and false assumptions, and there can’t be the answer he wants.

Poor Christopher Booker. He keeps on wittering about his EU obsession, and some Telegraph readers might even be taken in by it. But it’s just more rubbish, and goodness only knows why the Tel bungs him good money to churn it out. Best get it while you can, Chris.

And get it before your readers discover the reality, which is that you’re selling them a weekly pup.
Posted by Tim Fenton at 17:42