The desperation emanating from much of the Fourth Estate over the prospect of what might be contained within the Leveson Report is as nothing to the terrible torment demonstrated on Twitter by their pal Tim Luckhurst, professor of journalism at the University of Kent, where management must be hoping that nobody notices that he is in almost permanent wobbler-throwing mode right now. 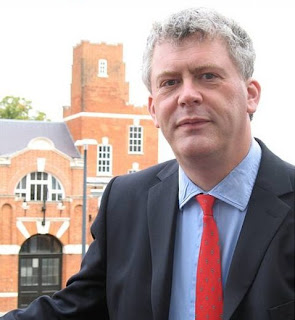 Luckhurst is all about principle, and that principle is that he is right, and anyone who disagrees with him is wrong, to the exent of being labelled a “Marxist”, “Totalitarian”, or worse. Moreover, any reading material he cites is authoritative, while anything not to his liking may be summarily dismissed. And don’t get him started on those who are partial to sun-dried tomatoes. 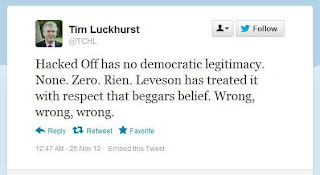 And in his sights is the Hacked Off campaign, which he clearly considers the gravest of threats to his preferred kind of press freedom. In pursuit of his target, he constructs a straw man of significant dimensions in banging on about democratic legitimacy. Hacked Off has as much of that as his own Free Speech Network, and Lord Justice Leveson has not treated it with any special respect. Wrong indeed. 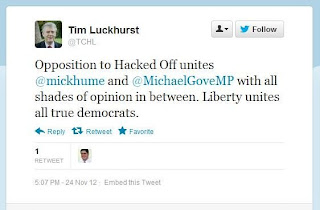 But Luckhurst is not finished with his democracy angle: those who he claims oppose Hacked Off are “true democrats” who are for his own version of “liberty”, which would be the kind not applied to the Taylor sisters, the Dowler family, the McCanns, or Christopher Jefferies. By definition, Hacked Off is somehow not “democratic”. That’s one very big straw man. 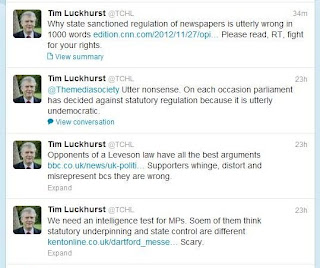 Moreover, any move to change press regulation that does not meet with his approval is also “undemocratic”, and utterly so. Luckhurst’s superior insights extend to calling this “state sanctioned”. Everyone else is whingeing, and indulging in misrepresentation. Those of differing opinion should be subject to an intelligence test: thus the true voice of tolerance and plurality of opinion. 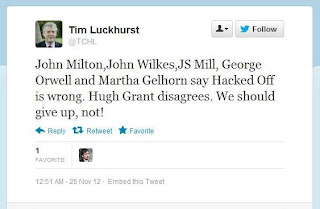 And Luckhurst has one advantage over Hacked Off: a time machine. He can therefore claim the support of John Milton, John Wilkes, John Stuart Mill, George Orwell and Martha Gelhorn. Thus the Free Speech Network is a superior construct to Hacked Off, and they can laugh in the face of the likes of Hugh Grant. 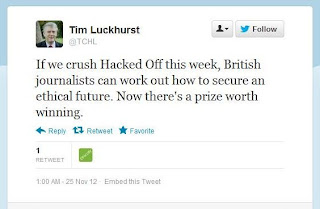 Then Luckhurst finally lets it slip: “If we crush Hacked Off this week” he begins. Yes, the champion of democracy is really about taking the jackboot to those who dare to speak out against the less than shining behaviour of the Fourth Estate. And save us the talk of an “ethical future” – all that means is more papering over of the cracks and editors and owners allowed to carry on as before.

Tim Luckhurst epitomises the desperation of much of the popular press. He reveals its true motives and sheer intolerance of dissent.
Posted by Tim Fenton at 09:37