Flannelled Fool – One For His CV

Having returned to somewhere outside London after leaving his shared flat somewhere south of the river, the flannelled fool Henry Cole, odious tame gofer to the perpetually thirsty Paul Staines at the Guido Fawkes blog, advertises on his Twitter feed that he is “looking for a new desk”. He is? In that case, he’ll need to sharpen up his CV, and here I can help him. 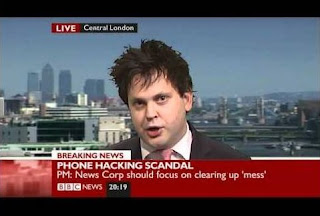 Master Cole has been rather reticent of late, to the extent that rather a lot of content he produced in the days – not so long ago – when he went by the alias of Tory Bear has been removed from view. This is a most unfortunate event. Happily, I can fill in one of the largest gaps, which shows the level of his perceptiveness together with a bonus for those who follow his habit for smearing others.

This insight into the Cole appetite for spin over accuracy comes from late 2009, with Phonehackgate beginning to enter into public consciousness. Jackie Ashley had mused on the possibility of the saga costing Andy Coulson his job: although she was wrong that he might go before the following year’s General Election, she was right on the money putting forward the view that he would be a casualty. 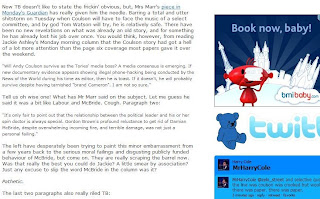 Cole did not hesitate, and with maximum derision coupled with minimum subtlety produced a post titled “Jackie Ashley Talks Bollocks Shock”, in which he excoriated her article. This has been preserved in full as two screen shots which I reproduce here for readers’ enjoyment. Ms Ashley was wrong, partly because she was married to the presenter of The Andy Marr Show (tm). 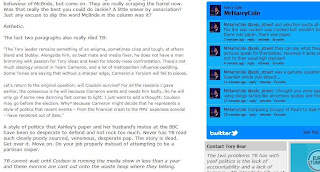 What the flannelled fool did not know, of course, and probably never bothered to stop and think about, was that Ms Ashley and her colleagues at the deeply subversive Guardian knew a lot more about Coulson than they were able to let on, especially his hiring of Jonathan Rees, which could not be mentioned at the time because of the upcoming trial over the Daniel Morgan murder.

It turned out that she was not talking “bollocks” at all, for which Cole never so much as apologised. The post was not taken down until recently. And those looking carefully at the screen shots will see one other interesting item at right: the echo from Cole’s Twitter feed. Remember, this is someone who has accused me of “stalking” him, suggesting that he is the victim.

But that Twitter exchange, into which he entered voluntarily and enthusiastically, was with, er, me. And it was Cole that followed me on Twitter: I wouldn’t have given him the time of day. I’m sure that anyone considering giving the flannelled fool that new desk would want to form the fullest picture of Master Cole’s behaviour, and so commend these details to anyone whom he approaches.

After all, I’m sure he’d do the same for me. Another fine mess, once again.
Posted by Tim Fenton at 18:15

dear God. for the very first time, I called by the guido blog this morning. I quickly lost the will to live. within 10mins I spotted 8 obvious inaccuracies.

well, that's 1hr of my life I'll never get back. I should have listened to fenton and simply not bothered. truly atrocious.