Another day, and another particularly nasty argument in the debate over the proposals about to be made by Lord Justice Leveson which nobody actually knows about, this time among the members of the National Union of Journalists (NUJ). The body’s last delegate meeting had endorsed “robust regulation of the press by an independent, accountable body”.

And NUJ General Secretary Michelle Stanistreet added “We believe that if we are to achieve independent, accountable regulation it needs to be underpinned by statute enabling a framework for a new body to be established with clear terms of reference, and a structure that involves journalists and civil society ... This is absolutely not the same as state regulation, far from it. Our model is based on the system in Ireland”.

She has therefore clearly come out against state regulation – but then, so has the Hacked Off campaign. Both are now being subjected to a barrage of abuse and misinformation from a large part of the Fourth Estate, which merely underscores what this blog pointed out yesterday about the possible reasoning behind last Friday’s Guardian editorial – to keep the peace. 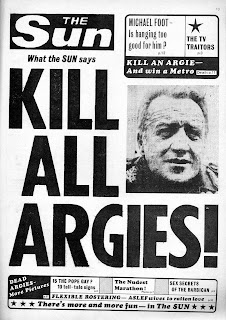 The level of debate – or rather, the depths to which it has already sunk – can be seen in an editorial yesterday in the Super Soaraway Currant Bun (and remember, if you want to know Rupert Murdoch’s views, read a Sun editorial). Here, readers are told of “the chilling decision of a union in our own trade to back Stalinist-style State regulation of newspapers ... Government control of the Press”.

And, just in case you didn’t take the hint, this would mean “We would end up like Russia, Zimbabwe and Iran, with State stooges and politicians deciding what can or can’t be printed in your Sun ... with journalists facing arrest for disobeying official censors, it would be the end of free speech in our country”. This is hilariously stupid, counter-productive and totally untrue into the bargain.

But it is typical of the howls of protest, screaming denunciation and abusive dismissal of anyone suggesting reform. Some of the lame-brained claim Leveson will stop them being journalists. Those with no experience of working in Ireland claim the model used in Ireland, of which they have no knowledge, is rubbish. Only a small minority messed up. This is a fight, and for the very survival of, er, something.

Or perhaps it’s all a conspiracy to draw attention away from the BBC and Jimmy Savile. Christ on a bike, this is utterly desperate in its sheer paranoia and panic. Leveson’s terms of reference include the preservation of press freedom. Nobody wants to curtail free speech – except those who want to remove the provisions of the Human Rights Act. And who do you think they might be?

The same papers that are now screaming the loudest. More stinking hypocrisy.
Posted by Tim Fenton at 14:46