The unofficial house magazine of the UK Independence Party – known to most people as the Daily Express – was clearly short of “Miracle Cure”, “House Price Rise” and “Pensions Horror” headlines today, and so went after the EU, always a favourite with Dirty Des’ increasingly downmarket rag. And, as so often the story splashed over the front page was completely untrue. 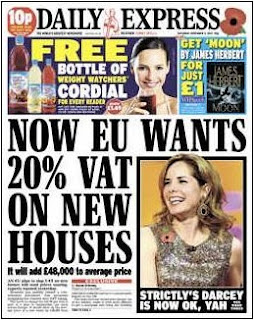 “Now EU Wants 20% VAT On New Houses” screams the headline, and, going once more into Jon Stewart mode, two things here. One, the UK is part of the EU, and you can’t be told what to do by a club that you are part of, and that can only proceed on tax matters if you agree to the proposal. So the EU isn’t telling us to do anything, because it cannot without our agreement.

And two, there isn’t a plan to “impose” VAT on new build housing, or indeed on any kind of private housing, despite the assertion that “Brussels has quietly issued a con­sultation document that proposes scrapping the current zero VAT rating ...the move to charge the full 20 per cent is part of a plan to standardise tax rates across Europe”. Brussels is a city. It doesn’t issue anything.

No, all that this piece does is to recycle a press release from the Residential Landlords’ Association and spin it to fit the paper’s hysterically Europhobe agenda, and only at the end, when most readers have already either thrown the paper in the bin and wondered why they paid good money for it in the first place, or begun to froth at the mouth and joined the Nigel Farage fan club, are the facts stated.

The European Commission spokesman puts the Express straight: “There is no proposal on the table ... any change would need the UK Government’s approval to become law”. This was echoed by the Treasury: “The UK Government will not change the VAT zero-rating of new-build homes”, thus confirming what I pointed out earlier – that the EU does not tell us what to do. We have to agree to changes.

And on any such proposal, we won’t. Other countries will also make their own decisions. The EU isn’t a big bad being somewhere in central Belgium that dictates to 27 countries. It’s a club. And the UK is a member. So we get a say in what goes and what doesn’t. Not, of course, that you’ll read that in the Desmond press, which has become the first to shill for UKIP.