While most attention is being focused on events in the USA – the upcoming elections, the latest employment figures and aftermath of “Frankenstorm” Sandy all feature today – the Government has slipped out a prosaically worded press release entitled “Membership and terms of reference of the Airports Commission”. Who they? What that? Let’s have a look and find out. 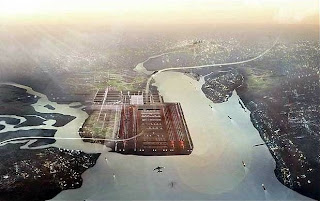 They won't be recommending any of these

The Commission will be chaired by Howard Davies, former head by turns of the CBI, Audit Commission and Financial Services Authority, who has advised and served Governments of both stripes. He is also a native of Manchester, where we encounter our first connection: also on the Commission is Geoff Muirhead, former head man at Manchester Airports Group (MAG).

Why this should be significant is that Muirhead presided over MAG at the time that Manchester Airport built its second runway, the first significant addition of full-length runway capacity in the UK for many years. He has left MAG with a large upgrade plan for Manchester Airport, which will if implemented in full increase capacity from 20 million to 50 million passengers per annum.

Added to these two upstanding fellows is the presence of John Armitt, former head of the Olympic Delivery Authority and career civil engineer, who had taken charge of the Channel Tunnel Rail Link (now High Speed 1) and Network Rail beforehand. And that is half the Commission, with another member having an aerospace background and one a former BP executive.

So what does this tell us about the kind of conclusion that is going to be reached by this high convocation of wise people? Well, the Commission is charged to “examine the scale and timing of any requirement for additional capacity to maintain the UK’s position as Europe’s most important aviation hub” and “evaluate how any need for additional capacity should be met in the short, medium and long term”.

That means that, if they also “maintain a UK-wide perspective”, there is likely to be a recommendation to build more runways, together with making best use of existing capacity and potentially more use of the rail network to provide connections between airports. While there is still a possibility of new airports or revisiting of old military sites, the makeup of the Commission suggests otherwise.

This is because, while there is considerable civil engineering and aerospace expertise there, folks like Davies and Armitt are dealers in the art of the possible. A new runway at Stansted, Gatwick (or both), together with expansion at Birmingham coupled to the HS2 project, and increasing passenger throughput at Manchester (possibly also in conjunction with HS2) are far more likely.

And no daft schemes like Boris Island will be on the menu this time.
Posted by Tim Fenton at 14:34