Leveson Live At The Mountbatten Room

So there we all were, gathered together in the room on the very top floor of the Queen Elizabeth II Conference Centre, waiting for Leveson. And even as we waited, news came in from those who had already had a sight of the Report and its key points. So who attended? Well, there were few well known faces, and for very good reason – many were legal teams and business executives. 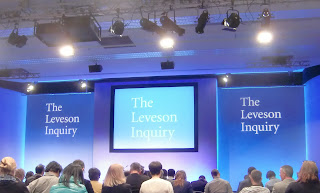 Ready for the off

There was, however, one familiar face on the front row, and that was the odious Quentin Letts (let’s not), who was moreover not taking notes. I mention this in passing, as when Quent gets to file his account of proceedings, he will doubtless demonstrate near perfect recall, if only those details which support his interpretation of what was said, which will be in accordance with his editor’s wishes.

The advisors arrived before Lord Justice Leveson, and I thought David Bell looked remarkably chipper, given the amount of mud that the Mail and Sun have slung at him in the past week and a half. He did look a bit unusual for someone held to be part of a sinister left-wing nexus of power, some kind of leftist equivalent to an old boy’s network and maybe even quasi-masonic.

Filing in and taking their seats – close enough to me for their name tags to be readable – were the legal team from Northern and Shell. Yes, there’s more than one of them: I counted six individuals, all keeping watch on behalf of Richard “Dirty” Desmond, which is interesting considering that Des has already removed his papers from the overview of the PCC.

So perhaps Desmond is worried about what Leveson has to recommend. Also concerned enough to turn up, but not enter the building, was what looked like every snapper in the Greater London area. Never before can groups of people filing in and then filing out of a building have been considered so interesting, nor deserving of communal attendance. And they weren’t the only ones.

I spotted an ITN van outside, which may be only expected, but one from NBC? The whole business must be deemed newsworthy beyond the UK. And that is because the impact of the printed word, despite the protestations of publishers and editors, still carries a crucial impact. It is given a trust that social media is not. Its practitioners wield influence that mere bloggers do not.

So perhaps I should not have been surprised to see the NBC van, or all the snappers. So what light did Lord Justice Leveson shine upon the workings of the press, and what did he recommend for the future? I will consider than next, and then look at the reaction from politicians. As Leveson pointed out, this was the seventh look at the press in 70 years. And on that he had only one further comment.

That was that he would rather there did not have to be an eighth.
Posted by Tim Fenton at 18:05